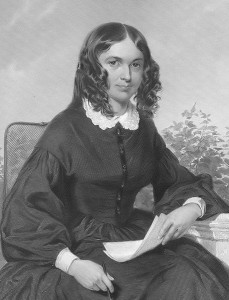 “Yes!” I answered you last night;
“No!” this morning, Sir, I say!
Colours, seen by candle-light,
Will not look the same by day.

When the tabors played their best,
Lamps above, and laughs below —
Love me sounded like a jest,
Fit for Yes or fit for No!

Call me false, or call me free —
Vow, whatever light may shine,
No man on your face shall see
Any grief for change on mine.

Yet the sin is on us both —
Time to dance is not to woo —
Wooer light makes fickle troth —
Scorn of me recoils on you!

Learn to win a lady’s faith
Nobly, as the thing is high;
Bravely, as for life and death —
With a loyal gravity.

Lead her from the festive boards,
Point her to the starry skies,
Guard her, by your truthful words,
Pure from courtship’s flatteries.

By your truth she shall be true —
Ever true, as wives of yore —
And her Yes, once said to you,
SHALL be Yes for evermore. 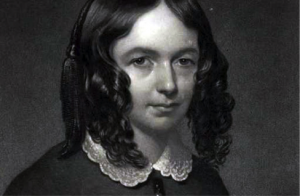 Elizabeth Barrett Browning (1806-1861) was a highly esteemed poet in the nineteenth century. Married to fellow poet Robert Browning, her fame and reputation surpassed his – she was even a role model for Emily Dickinson herself. Browning grew up in a wealthy household, which gave her the background and inspiration to write poems such as this one.

“The Lady’s Yes” opens with a woman taking back the “yes” she had given to a gentleman suitor the night before. We find out in the second stanza that the affirmative answer was given in response to the young man’s inquiry into whether she loves him or not. However, the speaker says she has changed her mind because “Colours, seen by candle-light / Will not look the same by the day.” The opportunity for love and the possibilities for her future that seemed so bright the night before dim by the next morning, and she decides that no, she does not in fact love him. The speaker was caught up in the atmosphere of the previous night, in the lamp light, the music (the “tabors” mentioned are a type of drum), and the laughter surrounding them, and agreed that she loved her suitor without thinking. Now she is dealing with the repercussions, namely the risk of being called “fast” or “free,” both insults for those who were considered ladies at the time. However, she says she does not regret changing her mind, and even blames the suitor for catching her off guard, saying, “Time to dance is not to woo,” and that it is as much his fault as it is hers.

The second half of the poem consists of the speaker giving the gentleman advice on how to really win over a lady. She tells him to be noble, brave, and loyal, as these are all traits that ladies deserve. She also advises him to be truthful. This implies that she does not feel that he was truthful with her. Caught up in the moment, she believes they both said things they did not mean, so she warns him to speak nothing but the truth to any future love interests, and not to focus so much on “courtship’s flatteries.” With this truthfulness, she says, if another lady responds with a “yes” to his love, she will actually mean it, unlike the speaker. Or perhaps she is even telling her suitor that he has a chance with her if he changes his ways.

The poem is written in four-line stanzas with a simple ABAB rhyme scheme. It is very traditional, with no extraordinary flair or unusual style. This makes sense, as the poem itself covers a traditional topic. It speaks to the customs of courtship in the nineteenth century. It lists the qualities looked for in a man – bravery, nobility, loyalty, and honesty – as well as the traits that were looked down upon in a lady. The rude names the speaker expects to be called are “fast,” used to describe a woman who rushed through things quickly with a love interest, and “free,” meaning a woman who gave out her “love” easily to the men around her. That is one of the great things about poetry and literature in general – it can shine a light on the culture at the time, dipping into the historical and creating for a richer reading experience.