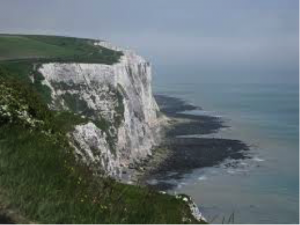 The sea is calm tonight.
The tide is full, the moon lies fair
Upon the straits; on the French coast the light
Gleams and is gone; the cliffs of England stand,
Glimmering and vast, out in the tranquil bay
Come to the window, sweet is the night-air!
Only, from the long line of spray
Where the sea meets the moon-blanched land,
Listen! You hear the grating roar
Of pebbles which the waves draw back, and fling,
At their return, up the high strand,
Begin, and cease, and then again begin,
With tremulous cadence slow, and bring
The eternal note of sadness in.

Sophocles long ago
Heard it on the Aegean, and it brought
Into his mind the turbid ebb and flow
Of human misery; we
Find also in the sound a thought,
Hearing it by this distant northern sea.

The Sea of Faith
Was once, too, at the full, and round earth’s shore
Lay like the folds of a bright girdle furled.
But now I only hear
Its melancholy, long, withdrawing roar,
Retreating, to the breath
Of the night-wind, down the vast edges drear
And naked shingles of the world.

Ah, love, let us be true
To one another! for the world, which seems
To lie before us like a land of dreams,
So various, so beautiful, so new,
Hath really neither joy, nor love, nor light,
Nor certitude, nor peace, nor help for pain;
And we are here on a darkling plain
Swept with confused alarms of struggle and flight,
Where ignorant armies clash by night. 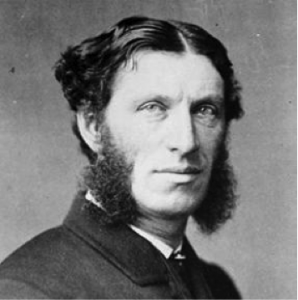 Matthew Arnold (1822-1888) was a famous English poet who graduated from Oxford University and worked as a cultural critic and school inspector. He is remembered as a sage writer, a type of author who rebukes and educates readers on existing societal concerns. He was a contemporary of Tennyson and Browning, and he is considered the third great Victorian poet.

When the big picture looks ominous, sounds dangerous and reminds us of armies clashing, Matthew Arnold recommends seeking solace in the fundamental bond between lovers.

Arnold’s well-known poem opens with a couple quietly looking out onto the moonlit English Channel, listening to the waves. As he’s looking out onto the beautiful seascape, the speaker realizes that while it seems like it’s a beautiful world, it’s really just an illusion; the world is simply a place filled with pain. The speaker references Sophocles, a playwright who is remembered for his tragedies. In his plays, Sophocles professed that humans only have the ability to become wise through suffering. Similarly, this poem reflects that it is through pain that people really begin to understand the world as a broken, distraught place. The speaker’s mind continues to reel as he connects the ebb and flow of the waves to the rise and fall of humanity, and the descent that he feels humanity has faced. At the end of the poem, there isn’t any beauty. He says that it seems like a beautiful world, looking out at the splendor of the ocean. But, he says that humans must be true to one another because there’s nothing else meaningful out there. Everything that seems to be really wonderful is just an illusion. The hope for beauty and happiness relies on loving one another.

Arnold uses the sea as a symbol for the inevitably negative fate of humanity. Throughout the poem, the sea and waves gain momentum and become more and more rough and violent. The waves come and go, but they ultimately bring the eternal note of sadness. The piece opens with a calm, moonlit ocean, and escalates to strip away the sea’s calm illusion and unveil the danger beneath the surface. He compares the ebb and flow of the sea to the ebb and flow of human misery. The ocean used to represent a “Sea of Faith,” as Arnold notes in the second-to-last stanza. However, this faith in humanity is withdrawing and retreating; humans cannot rely on the world for beauty and happiness. Instead, our ability to love one another determines our happiness.