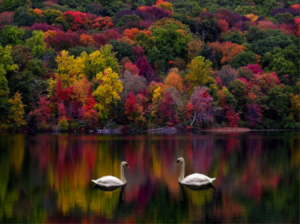 The trees are in their autumn beauty,
The woodland paths are dry,
Under the October twilight the water
Mirrors a still sky;
Upon the brimming water among the stones
Are nine and fifty swans.

The nineteenth Autumn has come upon me
Since I first made my count;
I saw, before I had well finished,
All suddenly mount
And scatter wheeling in great broken rings
Upon their clamorous wings.

I have looked upon those brilliant creatures,
And now my heart is sore.
All’s changed since I, hearing at twilight,
The first time on this shore,
The bell-beat of their wings above my head,
Trod with a lighter tread.

Unwearied still, lover by lover,
They paddle in the cold,
Companionable streams or climb the air;
Their hearts have not grown old;
Passion or conquest, wander where they will,
Attend upon them still.

But now they drift on the still water
Mysterious, beautiful;
Among what rushes will they build,
By what lake’s edge or pool
Delight men’s eyes, when I awake some day
To find they have flown away? 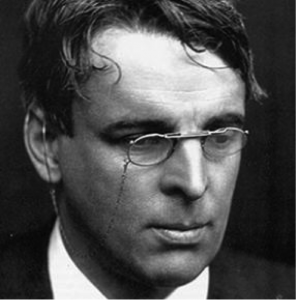 Published in The Collected Poems of W.B. Yeats by Macmillan, 1956

William Butler Yeats was born in Dublin on June 13, 1865. He came from a wealthy Anglo-Irish background, but opposed English influence in Ireland. He was one of the biggest voices of the Celtic Revival, and his poetry often dealt with mysticism in the form of Irish folklore and legends. He was a political poet, and his works also often dealt with Irish Nationalism. As Yeats grew older, cynicism replaced much of his earlier optimism. He was not satisfied with the direction of Ireland and Irish society, and his later work reflected this. Arguably his most famous poem, “Sailing to Byzantium,” meditates on this struggle and his place as an aging man in a modern world.

Published in a collection of the same name, “The Wild Swans at Coole” is a poem about the constancy of nature in the face of human turmoil. The speaker’s “heart is sore” after the realization that “all’s changed” since that time when he “trod with a lighter tread.” In contrast the swans are “unwearied still” and “their hearts have not grown old” with the passage of time. No matter what happens to the speaker personally or in the larger political theatre, the seasons will still change, the swans will still visit the autumn pond, and they will “delight men’s eyes” anew.

When considered in the political context of the time, the poem becomes even more poignant. “The Wild Swans at Coole” was published in its collection in 1919, only a few years after the Irish civil war and World War I. The speaker’s world-weariness and disenchantment are products of the new horrors developed with industrialism. The cyclical patterns of nature, such as the change of the season and the migration of birds, provide a counterbalance to this, if not a reassurance.