Oh, to be in England
Now that April’s there,
And whoever wakes in England
Sees, some morning, unaware,
That the lowest boughs and the brushwood sheaf
Round the elm-tree bole are in tiny leaf,
While the chaffinch sings on the orchard bough
In England—now!

And after April, when May follows,
And the whitethroat builds, and all the swallows!
Hark, where my blossomed pear-tree in the hedge
Leans to the field and scatters on the clover
Blossoms and dewdrops—at the bent spray’s edge—
That’s the wise thrush; he sings each song twice over,
Lest you should think he never could recapture
The first fine careless rapture!
And though the fields look rough with hoary dew,
All will be gay when noontide wakes anew
The buttercups, the little children’s dower
—Far brighter than this gaudy melon-flower! 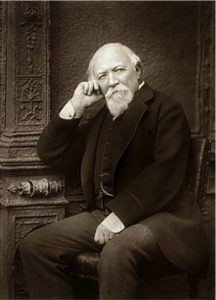 Victorian poet Robert Browning grew up in South London with ties to familial heritage in St. Kitts. His widespread family history includes an extensive musical background, literary exposure, and an evangelical faith. This path led him to pursue a career in poetry following his education at University College London, most famously through his work on dramatic monologues. With a life that spanned nearly the entirety of the 19th century, Browning’s work encompasses poetry on his travels in Italy (where he lived with wife Elizabeth Barrett Browning, a fellow poet) and throughout Western Europe.

Among Browning’s better-known works is Home-Thoughts, from Abroad. The poem opens with a reminiscence of England in the spring: “Oh, to be in England / Now that April’s there” (lines 1-2). This tone of wistfulness develops into praise for the author’s home, as can be when Browning assures that, “though the fields look rough with hoary dew, / All will be gay when noontide wakes anew” (lines 17-18). Browning does not idealize the land so much so that it appears perfect, but rather acknowledges the continual hope for better weather and a better future. 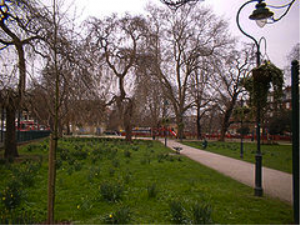 The poem progresses from April to May in the second stanza, and the result is a development that hints at the passage of time. Given Browning’s travels throughout Europe, this work of rhymed stanza (see “follows” in line 9 and “swallows” in line 10) aligns well with the author’s focus on his physical journey with his wife. Despite their comfortable lifestyle, however, “Home-Thoughts, from Abroad” suggests that Browning’s heart will always remain in his home nation of England.