One should always be drunk. That’s all that matters;
That’s our one imperative need. So as not to feel Time’s
Horrible burden that breaks your shoulders and bows
You own, you must get drunk without ceasing.
But what with? With wine, with poetry, or with
Virtue, as you choose. But get drunk.
And if, at some time, on the steps of a palace, in the
Green grass of a ditch, in the bleak solitude of your
Room, you are waking up when the drunkenness has already
Abated, ask the wind, the wave, a star, the clock, all that
Which flees, all that which groans, all that which rolls,
All that which sings, all that which speaks, ask them
What time it is; and the wind the wave, the star, the
Bird, the clock will reply: ‘It is time to get drunk! So that
You may not be the martyred slaves of Time, get drunk;
Get drunk and never pause for rest! With wine, with
Poetry, or with virtue, as you choose!

Charles Baudelaire, an early to mid nineteenth century French poet, writer, and essayist wrote this poem. Baudelaire was best known for his collected works, Les Fleurs du Mal, which challenged the boundaries of risqué poetry in France in the 1850’s. His work is known for questioning the established order of the world and for being deliberately irreverent and profane by the standards of the day. His poetry also had a deeply sexual and inherently mortal tone, as he often debated heavily over the nature of rules and morality. Baudelaire, a lifelong laudanum user, died in 1867. His work would go on to influence a wave of early modern French and English writers, poets, and artists, such as Edgar Allan Poe and Edouard Manet. 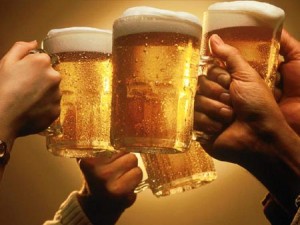 This piece, done in Baudelaire’s recognizably flowing prose style, was made as a standalone poem meant to describe his state of mind and relationship with poetry. The great advantage of Baudelaire’s writing style is its ability to be spoken aloud, and this piece doesn’t break that tradition. In many ways he reflects on his life and the trappings of mortality in what sounds, at first, like a particularly coherent bar song. Time is herein personified, made the great enemy of all who hope to live and enjoy life. He overcomes the obstacles, however, by showing the reader the way to combat the invulnerable onslaught of time: getting drunk. More than just physical exuberance, however, Baudelaire is talking about exposing one’s soul to something fully, regardless of what it is, as a way of escaping. For him the slavery of time is irrevocable, it will always take from those who bend to it. The solution is to lose yourself completely in another venture. Baudelaire definitely took his own advice in this matter, he drank, wrote poetry, and debated virtue for his entire life, although he never could quite escape the idea of mortality and his great enemy Time.