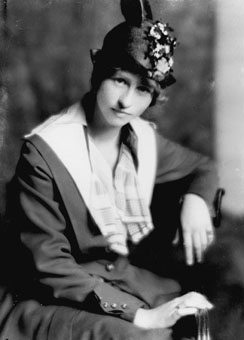 I will protest you with my favorite vow.
I would indeed that love were longer-lived,
And vows were not so brittle as they are,
But so it is, and nature has contrived
To struggle on without a break thus far,
Whether or not we find what we are seeking
Is idle, biologically speaking.

Edna St. Vincent Millay was born on  February 22, 1892 in Rockland, ME. She died on October 19, 1950. Her rise to fame began with the long poem “Renascence,” which she submitted to a poetry contest in 1912. Though she was ultimately awarded fourth place, her poem had been widely considered the best entry and her low finish caused a scandal that brought Millay a lot of publicity. Shortly thereafter, she received an offer to have her education at Vassar College paid for by a wealthy patron of the arts who enjoyed Millay’s poem. She published several collections of poetry and several plays throughout her lifetime. In 1923, Millay became the first woman to win the Pulitzer Prize for poetry.

This poem is characteristic of Millay’s work in that it is clearly written from a female perspective. This is a traditional Shakespearean sonnet that speaks of love, as many Millay poems do. Here the speaker tells a lover that their time together is brief, so they must cherish every moment of it before either or both of them falls out of love or is forced to separate by outside circumstances. While they are together they will make promises to each other that might not be fulfilled, including the vows Millay mentions.  The speaker laments that the vows are not binding, but ends with the consolation that it doesn’t really matter, “biologically speaking.” Essentially, the poem concludes with a wry acceptance of the failure of individual relationships in light of the larger pattern of survival.  Millay’s whimsical tone suggests a quirky take on the carpe diem conventions, seeming to reject the urgency of the genre but leaving the reader reasons to wonder if the speaker is desperately trying to mask her frustration.