Still, is the bustle in the Brook —
Sealed are the spicy valves —
Mesmeric fingers softly touch
The Eyes of many Elves —

Perhaps a squirrel may remain —
My sentiments to share —
Grant me, Oh Lord, a sunny mind —
Thy windy will to bear! 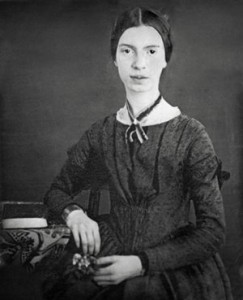 Emily Dickinson (1830-1886) was an American poet who lived the majority of her life in Amherst, Massachusetts. A reclusive, private person throughout adulthood, she dealt with the death of a close friend at a young age, which no doubt attributed to the recurring presence of death and immortality in her later poems.  She maintained frequent and personal correspondence with her friends in lieu of physical relationships that her introverted character could not withstand.  Dickinson was a prolific poet, writing nearly eighteen hundred poems in just half a century.  Only a handful were published during her lifetime, and these were heavily edited to fit more contemporary poetic conventions.  Unlike other famous poets at the time, she wrote in short lines and utilized slant rhyme and unconventional mechanics.

“Besides the Autumn poets sing” was written in 1859, during what is considered the first period of Emily Dickinson’s writing.  The poet uses a conventional rhyme scheme to bring to life the transitional nature of autumn, a period of time that sits uniquely between “the snow” and “the Haze”.  Just as the mornings and evenings become more severe and inhospitable to living things, the plants that were recently in full bloom are “Gone”; Dickinson alludes to William Bryant’s poem “The Death of the Flowers” and James Thompson’s poem “The Seasons” in this second stanza.  The flowers, the brook, the elves, all lively aspects of nature still and sleep as the autumn gives way to winter.

While the first three stanzas enumerate the changes to nature that occur during the fall season, the fourth shows Dickinson’s awareness of the effects that seasonal change can have on the human mind and disposition.  In the same way that special lamps are installed on college campuses to counteract the effects of Seasonal Affective Disorder, Dickinson recognizes that “a sunny mind” and disposition left over from the summer months is required to bear the “windy will” of God that is encountered during the winter.  She also identifies the loneliness and solitary feelings that can occur toward the end of the year when the season has stripped the trees and sent the animals into hibernation. Dickinson hopes for “a squirrel” to remain once autumn has passed into winter, helping her bridge the gap between the different seasons and the effects that they have on both the landscape and her own mind.