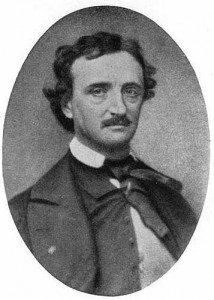 It was many and many a year ago,
In a kingdom by the sea,
That a maiden there lived whom you may know
By the name of Annabel Lee;
And this maiden she lived with no other thought
Than to love and be loved by me.

The angels, not half so happy in Heaven,
Went envying her and me—
Yes!—that was the reason (as all men know,
In this kingdom by the sea)
That the wind came out of the cloud by night,
Chilling and killing my Annabel Lee.

But our love it was stronger by far than the love
Of those who were older than we—
Of many far wiser than we—
And neither the angels in Heaven above
Nor the demons down under the sea
Can ever dissever my soul from the soul
Of the beautiful Annabel Lee;

Born on January 19, 1809 in Boston, Massachusetts, many credit Edgar Allan Poe as the father of the detective story.  Poe found himself orphaned at the age of three after his mother died and his father left the family.  John and Frances Allen, successful Virginia tobacco merchants, adopted Poe and raised him.  Poe initially attended West Point Military Academy before his expulsion for failing to fulfill his military duties.  His infamous detective stories started in 1841 with the publication of “The Murders in the Rue Morgue.”  He won a literary prize in 1843 for “The Gold Bug.”  He reached his height of fame with the “The Raven” in 1845.  Poe entered a period of declining health after the death of his wife Virginia in 1847.  He passed away on October 7, 1849.