Alas! a woman may not love!
For why should she bestow in vain
The riches of that treasure-trove
To win but a receipt of pain
For never will the gainer pay 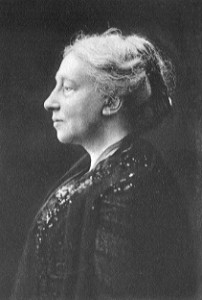 In full the love she gives away –
Be in a brother – soon some other
Sweet maiden passing holds his eye
And in his thought she stands for naught
His second self in days gone by –
Be it a husband – ah! how soon
The rainbow-coloured honeymoon
Fades in dull tints of common life
With misty cares and clouds of strife –
Be it her sons – some few short years
They cling to her in smiles and tears
But childhood passes fast and then
The boys look on themselves as men
And learn too quickly to despise
The love lore in their mother’s eyes –
Or if – ah me! she chance to find
One led to her by wayward fate
In whom she learns a kindred mind
Found by her own too late – too late –
Ah pity her – for it she yield
What from remorse her soul can shield –
Or if she conquer, the sore strife
May yet have cost her half her life –
The wound that ne’er can be laid bare
May be the sorest scar to wear –
The grief that brings no right to weep
May be the one to banish sleep –
Perchance not so in heaven above –
But here, a woman may not love –

Born March 15, 1852 in County Galway, Ireland as Isabella Augusta Persse, Lady Gregory was a key figure of the Irish Literary Revival of the late nineteenth and early twentieth century.  Although she was born a member of the Anglo-Irish Protestant aristocracy, she held a great appreciation for the Irish peasant culture throughout her life, which prompted her to collect the folklore and mythology of her area.  Lady Gregory also played a pivotal role in the founding of the Abbey Theatre and the Irish National Theatre Society.  Her home at Coole Park became a meeting place for the great literary figures in Ireland, including poet and dramatist William Butler Yeats in particular.  Over the years, Lady Gregory became a central female figure in Ireland, and her different associations with men prompted “Alas! a woman may not love!”  In the poem, Lady Gregory reflects on her specific relationships with men: sister to brother; wife to husband; mother to son.  Reflecting the personal tragedies that she suffered within her lifetime—she was left a widow for the second half of her life, and her only son, Robert, was killed during the First World War—this poem demonstrates the deep sadness and loss that Lady Gregory felt toward the end of her life.