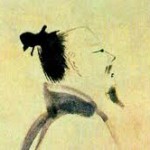 The earth has swallowed the snow.
Again plum trees open their blossoms.

The new willow leaves burn gold.
The waters of the lake are silver.

Now the butterflies dusted with gold
touch their velvet to the hearts of flowers.

In his still boat
the fisherman pulls up his silver net,
rippling the still water.

I first heard a version of this poem in 1965 as the lyrics to a song performed by the folk singer Leon Bibb.  Years later, I saw another version as a poem by Li Po (which I’m told is pronounced Lay-bo in Chinese.  I felt like an even more intriguing poem in English was lurking in the frisson between the two versions, so I enlisted the aid of Xiaoping Yu in making a new “translation.”  It was printed as a poster for National Poetry Month at WLU in April, 1998 with calligraphy contributed by the late master I-Hsiung Ju.    In the current climate (cultural as well as meteorological), the most appropriate poetry often seems to be elegy, lament and rant, as it’s not so easy now to detect the comforts of the natural world.  Perhaps remembering that patient and hopeful fisherman is a step in a healthy direction. RTS