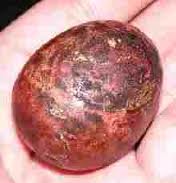 We hold this seed of polished brick,
taken from a deer’s belly
smooth as an eye from tumbling,
and stick it to a mad dog’s bite to soothe

the ache and draw out the madness.
Shiny as a little moon with
hair coiled inside the hardness,
the concentrated rock will breathe

venom from a snake bite, and oil
from sores of poison ash and oak.
Some carry one in pocket all
their lives to give them secret luck

an antidote to packsaddle sting
or hornet.  A madstone held to
a blackwidow bite will wring
out the drop of deadly tallow.

But it is sanity the nugget
promises most, a chemical
to counter one madness, one hurt,
with another’s, cold, medicinal.
*******

This nugget of Appalachian lore, wrought toward serious comment about damage and healing, was published in Shenandoah Vol. 45, No. 3 in 1995.  In its taut twenty lines Morgan explains what a madstone is and how it’s used to cure poisons from without, while suggesting its greatest value is against poison’s from within.  The word “ruminant” lurks behind the poem, as only animals with multiple stomachs produce such a bolus.  While reminding us of the many perils of a rural world– spiders, snakes, plants, rabid dogs — he compacts the lecture into five quatrains with a normative eight-syllable line, and Morgan rhymes adroitly, surprisingly.  As for the “smooth/ as an eye from tumbling,” I take it to mean an eye agate, which would smooth out and shine from a few minutes in a lapidary tumbler.  “Lapidary”  — that’s the process through which poems like these are made.