Because I could not stop for Death –
He kindly stopped for me –
The carriage held but just ourselves –
And Immortality.

We slowly drove – He knew no haste,
And I had put away
My labor and my leisure too,
For His civility –

Or rather – He passed Us –
The Dews grew Quivering and Chill –
For only Gossamer, my Gown –
My Tippet – only Tulle –

“Because I Could Not Stop for Death,” one of Emily Dickinson’s most well known poems, portrays the narrator’s leisurely interaction with the afterlife. The poem in its entirety conveys a sense of peacefulness — “Death” and “Immortality” are personified as a kindly gentlemen accompanying the narrator on their carriage ride. Though Dickinson demonstrates conflicting views on death and the afterlife throughout her works, she seems to find consolation in this poem, for though the narrator is bound for the grave, the “swelling in the ground” is but a stopping point. In this manner, Dickinson shows a firm belief in the afterlife, for the ultimate destination of the carriage, betrayed by the “the Horses’ Heads,” is “Eternity.” Overall, the poem serves as a gentle “Memento Mori,” reminding the reader of the inevitability of death while at the same time reassuring its transitory status.

Emily Dickinson is perhaps one of the most famous of the American Romantic poets. Born in Amherst, Massachusetts in 1830, she lived an extremely introverted life, rarely leaving her home. Very few of her more than 1700 poems were published during her lifetime. It was not until after her death in 1866 that Dickinson’s younger sister, Lavinia, discovered the trove of her work and set about  circulating the works. 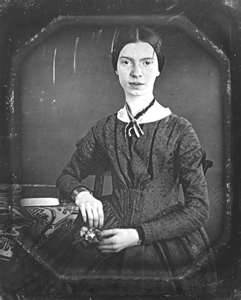