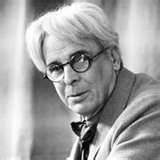 That is no country for old men. The young
In one another’s arms, birds in the trees
– Those dying generations – at their song,
The salmon-falls, the mackerel-crowded seas,
Fish, flesh, or fowl, commend all summer long
Whatever is begotten, born, and dies.
Caught in that sensual music all neglect
Monuments of unageing intellect.

An aged man is but a paltry thing,
A tattered coat upon a stick, unless
Soul clap its hands and sing, and louder sing
For every tatter in its mortal dress,
Nor is there singing school but studying
Monuments of its own magnificence;
And therefore I have sailed the seas and come
To the holy city of Byzantium.

O sages standing in God’s holy fire
As in the gold mosaic of a wall,
Come from the holy fire, perne in a gyre,
And be the singing-masters of my soul.
Consume my heart away; sick with desire
And fastened to a dying animal
It knows not what it is; and gather me
Into the artifice of eternity.

Once out of nature I shall never take
My bodily form from any natural thing,
But such a form as Grecian goldsmiths make
Of hammered gold and gold enamelling
To keep a drowsy Emperor awake;
Or set upon a golden bough to sing
To lords and ladies of Byzantium
Of what is past, or passing, or to come.

It’s rather convenient to be a twenty-two year old when reading W.B. Yeats’ “Sailing to Byzantium.” The namesake of Cormac McCarthy’s novel and the Cohen brothers’ movie, No Country for Old Men, “Sailing to Byzantium” frames youth’s unique pleasures, be they lofty embraces on the Bosporous or tube trips down the Maury, against the inevitability of old age. Published in 1928, during the twilight years of Yeats’ life, “Sailing to Byzantium” phrases an apparently grim message in intimidatingly poetic verse. Which doesn’t exactly appeal to those of us busy with life’s “sensual music,” however, graduating seniors should take heart: Yeats challenges readers to let the “soul clap its hands and sing” in celebration. But why would the soul rejoice when traveling such dire straits?

Yeats begins his answer between lines seven and eight where he writes, “Caught in that sensual music all neglect/moments of unageing intellect,” and doesn’t conclude until his final stanza, where the soul’s perfect, or “golden” form is described. So, rather than focusing on LexCo and Windfall’s transient pleasures, Yeats asks us to keep our eye on the “eternal” prize, whatever it may be, to keep life zesty. Ultimately, “Sailing to Byzantium” packs the same punch your Dad does when he’s reminiscing about college: yeah, it was awesome, but with the right disposition and a comfortable chair, life still ain’t too bad.