In the museum gift shop at the foot
Of Marye’s Heights, a lone, slim volume
Entitled Orthopaedic Injuries

of the Civil War lay remaindered
at half price, a book many
had handled without wanting to

own. I could not resist, either,
looking inside, compelled by two
photographs, portraits on the cover

of the same, formal young man:
in one image, both of his legs
are missing; in the other, he wears

prosthetic limbs, bared for the camera.
In image after image, the book
catalogues particular survivals,

organized by the anatomic
regions of loss: extremities,
upper and lower, thigh, shoulder—;

some men are halved in the next
photograph risen from ether
or chloroform, from opium

and whiskey — to wear inventions
of wood, leather, metal. They had
survived the bullet, the surgeon’s knife,

and now this first, rough reconstruction
of the body, to look part the aperture
and into the photographer, wearing

the century’s dark caul, then into me.
I bought the book, but not for their
unique disfigurements; it was

their shared expression I wanted — resolve
so sharply formed I cannot believe
they ever met another death. 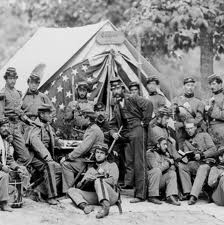 She couldn’t have believed
In her given name very much,
Or else she wouldn’t have followed
That succession of slamming doors
In the distance toward Sharpsburg
And the thick, green smell of slaughter in the air,
And the surgeons in the farmyard,
Splattered from head to foot with blood,
Them and their shingle-high piles of limbs,
The bright, white cores of bone broken in the red meat,
And the boys who sat in the farmhouse yard,
Their shirts pulled up and their entrails in their hands,
As if they were clinging to a favorite, wet octopus
They couldn’t bear to drop.
She used to dream of one of them,
Hearing he own voice teasing him out of shock,
And seeing the slug that had passed through her sleeve
Hit him in the cheek and split his face open.
She never forgot the screams at Antietam,
And it must have seemed strange to her, falling asleep
Years later in the back bedroom at Glen Echo,
To listen to the screams of the roller-coaster riders
At the amusement park next door. 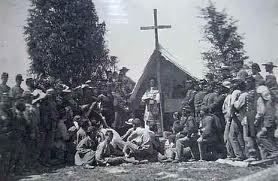 It was all their idea, not Hooker’s,
and before long officers noticed that this Negro
from across the Rappahannock was almost always
right about what the Secesh troops were doing
over in Fredericksburg, though Dabney
was only a cook, a servant, and married

to a woman whose name we’ll never know:
she begged Hooker to send her across the river
as a laundress to wash the sweat
and stains from the uniforms of slavers.

It was all their idea, maybe hers first,
though finally Dabney showed one of Hooker’s men
how he could see her clothesline
across the river and read it like semaphores:
the gray shirt Longstreet, the red one Stonewall
pinned up and taken down in accordance
with their comings and goings from camp,

Rebels dancing in the sunshine, flapping
in the wind, others to soon fall
in clothes bloodied, shot full of holes
because a black woman scrubbed
and rinsed and did not miss a thing. 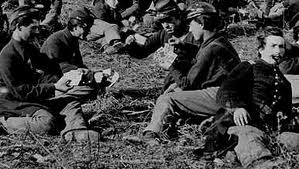 Claudia Emerson received the Pulitzer Prize in Poetry for Late Wife in 2006.
Champ Atlee’s work has appeared in America, Civil War and The Amherst Review.

Joanne Lowery’s Leper Woman and Other Poems was published by March Street in 2002.

These three poems originally appeared in “A Portfolio of Poems about the Civil War” included in 2003 in Shenandoah, Volume 53, Number 3. The portfolio was guest edited by Stephen Cushman.