The Empty Road Full of People 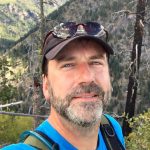 Derek Sheffield’s book of poems, Through the Second Skin (Orchises, 2013), was a finalist for the Washington State Book Award.  His poems have appeared in Poetry, The Georgia Review, Orion and The Southern Review.  He lives with his family in the foothills of the Cascades near Leavenworth, WA, and he is the poetry editor of Terrain.org.

Everything looks right in this photo
of the 1910 Fourth of July parade
taken from a rooftop near Palouse.
Black and white world of hand-lettered windows,
men in hats on crowded walks, and power poles
striding toward a bright horizon.  Everything
except the foreground where townsfolk
are not facing the oncoming displays
of first-ever automobiles, only
the empty road before them.

See those splotches
across the packed dirt?  That’s where
the Okanagans and Wenatchis went.
First they were there, in vests and feathers,
liquid moments riding horses,
then the slow swipe of a thumb.

He wanted them gone, that photographer,
white as I am, ghost bent over
negatives in the dark.  In celebration
of his independence the tribes had come.
What made him want to undo that?
What could he not see
in their faces, their bodies
smeared into oil stains?

A hundred years later his failure
appears in my old student come back
from the arts school, her black hair
not vanishing but sliding across her shoulders
as she leans from her chair with the mini sally bag
she has made.  Celly bag, she says,
and points to the woven image
of the cell phone, her near-smile the same
I’ve seen in her uncle and others of her tribe.

Here they are, brought forward by her hands.
Here she is, as if years hadn’t gone by,
asking me to stand beside her
as she raises her phone aimed back.