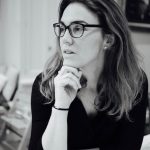 like the tunnel that runs under the river where he likes
to shout his name. Arlo breaks an egg over that

and marvels at the cracked peel,
its underside slippery like wet leaves.

Is this the chicken’s skin? he asks.
Earlier, when we woke before everyone else

he told me to be careful wiping his cheek with a cloth
because there are bones inside him.

upside down, a peculiar enantiodromia if you look
for a while, which I do.

The earth is warming. In the playground where I hide
in another book by the furtive Italian

I hear a woman say, 68 degrees in February
and liberals are going to complain about it.

But earth-orbiting satellites can already see

Arlo’s head is a new moon, a silk cocoon
spun by the tireless caterpillar who twists her body

into thousands of figure eights for each strand.
I can’t stop kissing it in the kitchen,

the last infant hair
I’ll know. I hate to think not one strand of it

will be discovered in ocean residue
or tree rings or sedimentary rocks. That this is all

moving wildly over it

like a dial measuring the composition of air
or birds scattering on the snow.

3 Responses to Last Thoughts on Earth