The Farm Wife Goes to Another Reunion 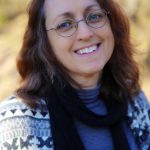 Shari Wagner, Indiana’s fifth Poet Laureate, is the author of The Harmonist at Nightfall: Poems of Indiana (Bottom Dog Press, 2013) and Evening Chore (Cascadia, 2005). Her poems have appeared in North American Review, The Writer’s Almanac, and American Life in Poetry. She teaches for the Indiana Writers Center and Butler University’s Religion, Spirituality and the Arts Initiative.

I remember when we played wild rounds of Dutch Blitz
till milking time. But now no one owns a cow,

the young rarely come, and when they do, they leave
after lunch. This year we gather at a state park

in Indianapolis. Instead of dealing cards, cousins pass
cell phones with photographs and talk about gall stones

and Uncle Ervie’s glass eye. Half asleep, I wander off
toward the Nature Center that displays a mastodon tooth

and a gray bird with eyes ringed in red. The notecard
says he’s a passenger pigeon. He traveled with others

in clouds so thick they’d darken the sky and make a ruckus
loud as Niagara Falls. When their flocks were shot to pieces,

the scattered birds didn’t have a clue how to live alone.
The last one, Martha, died in the Cincinnati Zoo. Maybe

I’ll see her at next year’s reunion.

1 Response to The Farm Wife Goes to Another Reunion