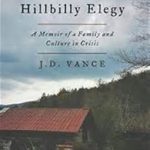 Perhaps in part because I live at the foot of the Appalachians and occasionally teach the region’s literature, I was eager to read J. D. Vance’s best-selling Hillbilly Elegy.  And I’ll admit that my enthusiasm was amplified by Vance’s appearances on CNN political shows, where he was enlisted, effectively, as an expert on the frustration, anger and near-hopelessness of the divested and marginalized natives of the Appalachian highlands and their kin who have moved to the Midwest in search of employment and dignity.  I was, however, disappointed with the book, and by the time I reached the last chapters, I realized that the disappointment was to some degree my fault.

The subtitle of the book is A Memoir of a Family and Culture in Crisis, but the gap between my expectations and the reality of the book is the result of the main title.  “Hillbilly Elegy” is an inviting phrase, because the two words are born of such different diction and their pairing implies a willingness to forego the euphemisms about superficial identity of Appalachians and avoid the distraction of linguistic niceties.  “Hillbilly” suggests candor and transgression; “elegy” suggests both erudition and lamentation for the loss of something precious, perhaps even beyond prosperity.  I expected a book exploring a culture and its identity crises, but Vance’s book is really a more personal memoir, which succeeds in portraying his early navigation through a family beset with the habits and attitudes that currently assail the poor and uneducated highlanders who migrate when mining plays out in their region.  But its focus is, for about three-quarters of the book, much narrower, as if the larger picture of Appalachian culture and history can be adequately represented by one clan’s difficulties, awful and pitiable as they are.

In that focal capacity, the personal story is effective and alarming.  The drug addiction, violence, premature procreation, dearth of hope and widespread of denial all play a role in the defeat of every family member less disciplined, intelligent and lucky than the author.  Along his path from Jackson, Kentucky (and Middletown, Ohio) to the Marine Corps, Yale Law and on to Silicon Valley, Vance reveals a rogue’s gallery of people he calls “hillbillies,” evidently intending to show that he pulls no punches and toes no politically correct line.  I suspect the true driving force behind the book is a desire to explore and perhaps explain how he can love his people while detesting most of their actions and beliefs. 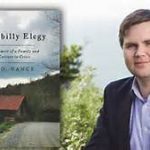 Unfortunately, his decision to shoot from the hip does not protect him from clichés of situation and language, generalities and digressions.  One acute longing I felt reading this book was to experience the sensory vigor of a life attentively lived, for arrestingly acute observations and provocative contrasts.  And to be fair, Vance is handy with the demographics and predictable conflicts, while he occasionally turns a pithy anecdote certifying his family’s routine dysfunction and occasional sacrifice.  Unfortunately (and he readily admits this) the story he tells is not limited to mountain people and not very different from the adversity that besets urban African Americans.  He also mentions, but only briefly, that there is Appalachian life beyond the pattern his family follows.

Even more greedy, I also wanted to hear the sound of genuine Appalachian dialogue, those neologisms and transgressive figures of speech that approach poetry (like “nar a steam to go around” or “wallop my dodger, if you please”), instead of being told that mountain people have a saying – “too big for his britches” – a phrase long ensconced in the mainstream of American slang.  I most wanted to see how problems — like the proclaimed respect for hard work he records from those who exhaust their ingenuity avoiding it – are exacerbated and given mythic status in the midst of a contrarian culture which inspires both scorn and admiration.

So Vance’s title, and his TV persona, gave me an appetite for a book which he was not on a mission to write.  My error.  Truth is, when a book says “memoir” on the  cover, I’m inclined to spring in the other direction.  But I took a chance, figuring that one who loved literature as much as Vance says he does would be familiar with the word work of everyone from Lee Smith (say Saving Grace) to Ron Rash (perhaps The World Made Straight), Charles Frazier to Charles Wright, Wendell Berry and Harriet Arnow.  In short, I wanted to hear about the evolution, amid economically-driven diaspora, of those features of mountain life which invited and nourished the famous hillbilly pride – the music and storytelling, the resourcefulness (right down to but not emphasizing moonshining), the timbering legacy, hunting, mining, union life, ecology, animal husbandry, agriculture, medicine, humor, matters ethnographic, demographic and linguistic.  These are not subjects I wanted instead of the recent history of the Blanton-Vance story – ending in the high cotton of law school, beautiful wife, affluence – but rather broader matters which I wanted to see the Blanton-Vances negotiating.  I wanted the larger historical, spiritual, aesthetic context, and though the author touches briefly on religion, he seems unengaged with even the various robust kinds of faith that still both staunch and hobble Appalachians today.  In short, Appalachian culture extends far beyond his topical and personal use of the term, and even when his family didn’t practice many Appalachian virtues, they may have been living in the midst of them.

The rogue but loving grandmother with a foul mouth and an aptitude for firearms seems important to the tale, and she gets more backstory than most, but mountain music, dancing, instrument making, highland craft, generosity and suspicion all deserve to play a larger role and set the stage for Vance’s Horatio Alger chronicle.  What would have gone a long way toward satisfying me?  The author seems to feel that very few sources other than family memory and economic analyses would help a reader understand why one particular region was the perfect (and ironic) locale for his pilgrim’s progress.  I wish he had spent a few hours with the U. of Tennessee Press’s Encyclopedia of Appalachia, some time reading creative works like those of Robert Morgan, Denise Giardina, Anne and Breece Pancake, Chris Offutt.  A journey through the photographic albums of Shelby Lee Adams would have provided valuable touchstones, and some hours listening to Doc Watson and Dock Boggs, Earl Scruggs and Vassar Clements, Ralph Stanley and Jean Richie.  The hymns and murder ballads, the Jack tales and rusties.  I suppose I wanted to see how his story and those which it parallels exists in relation to the Foxfire books, the early research of Horace Kephart, Williams’ Appalachia: A History, Drake’s A History of Appalachia, or Tom Burton’s lively books about folk customs and religious practices.  In short, the story Vance tells loses force when isolated (or nearly so) from the truth and falsity of common notions concerning “the hillbilly.”  While there is no substitute for personal experience and word of mouth, he might have cast a wider net for a richer catch.

I hope it’s clear what I’m suggesting here: you can’t get a good grip on Appalachian Culture and the people who are genuinely enmeshed in it unless you address Appalachian folk culture, which is soil and seed and weather from which contemporary migrant Appalachians have sprung.  Their journey from the hills to the cities may be an alternative to what Weston la Barre calls a “crisis cult” in They Shall Take Up Serpents, his landmark study of serpent handling believers.  How much richer this story might have been against the backdrop of  the Carters, Hazel Dickens, courting dulcimers and beekeeping, mountain heroes from the Skillet Lickers to those who follow “The Sacred Harp.”  Acuff  and lumbering, hunting and Tommy Jarrell, railroading, the cultivation and employment of ginseng and other herbs.

When I think of Hillbillies (rabbit twisters, stump jumpers – mountain dialect is full of synonyms), I think of resourceful and sometimes desperate people who suffer the deprivations and inspirations of living on the margins.  In this memoir we see plenty of what they have to be ashamed of, but the balancing measure in their equation would involve the indigenous acts and beliefs they are proud of.  The interplay between these and how the narrator of the book paddles upstream in this rough current would have taken longer to write and hunger for a wider vision.  It would probably be less timely and topical, though perhaps just as political, but it’s not a volume destined for the best seller list, though I hope Vance will try his hand at it anyway.

I’d like to imagine Vance spending an evening tapping his feet to Vassar Clements’ fiddle (“Orange Blossom Special,” for starters), an afternoon gawking and arguing at Ferrum College’s fall Folklife Festival, a weekend with Cold Mountain and Saving Grace.  None of his discoveries would be likely to crowd out what he has already recorded, but the result might be more lament than complaint, and here’s hoping that, though “misery” may belong in the title, perhaps he will find that “elegy” is a touch premature. 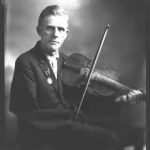