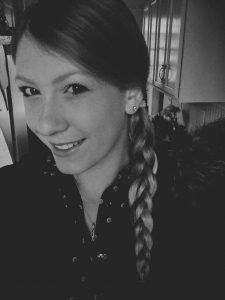 Jess Quinlan is a technical writer living in Staunton, VA.  A graduate of the Hollins MFA program, she serves on the Advisory Board of the James Dickey Review.

When Powhatan moves west to die,
the world is still old and voleries

of Carolina parakeet wheel ripe green and
orange out of the rum cherry. It is probably

autumn. He takes the feather-work cloaks
and crafted mussel shells, each a shining

cracked pot holding the remainder of his
children. He leaves them and flies

to the hunting ground: a golden wood lined
in sassafras, hickory, sugar maple, and tulip

poplar, that tall girl of a tree with her honey
and water cups. He steps behind the curtain

of the rivers, into the wild rockland where no
one wants to follow, priest into the holy

of holies. He doesn’t think much of leaving
them all to his half-mad brother; I don’t know

what he thinks. When the sun has polished
his bones, his people put them away. No one

remembers where that forest had been or
they forgot the name, so you couldn’t hold it

with a map. But I tell you: cicadas split
their backs and crawl open. It is still here.

WINNER OF THE GRAYBEAL-GOWEN AWARD FOR POETRY