THE OPPOSITE HOUSE (LSU, 2015) by Claudia Emerson

Michael McClure has taught at Washington and Lee and currently teaches at Virginia State University. 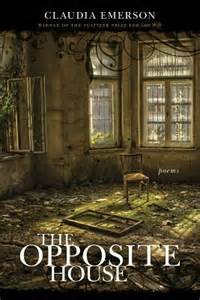 Everything is Lost: Review of The Opposite House: Poems by Claudia Emerson, Baton Rouge: LSU Press, 2015.

Claudia Emerson’s new collection The Opposite House, published posthumously by LSU Press, confirms and expands her identity as a poet of loss. Ever since her first book, Pharaoh, Pharaoh (1997), also from LSU, Emerson has explored what the writer of the blurb on the back of that volume called “the irony of loss.” With The Opposite House, however, she takes that “meditation” to a whole other level: Everything is lost. The central problem–for all of us, really–is what our responses to this inescapable fact will be, can be.

The volume itself is a marker of loss for all of us who love poetry, who have enjoyed her body of work, because Emerson died of cancer in 2014. The awareness that she must have been crafting these poems while facing her own death adds another level of poignancy to the reading.

Does her death make the poetry better? Of course not. But perhaps it adds another dimension to the array of loss the book so thoroughly explores. And her poetry needs no artificial boost; it is clear-sighted, far-reaching, disturbing, and at times painfully honest, at others humorous. The Opposite House is the most ambitious, most fully realized of Emerson’s books (and I say that even while celebrating her 2006 Pulitzer Prize-winning The Late Wife and looking forward to the just released Impossible Bottle). The Opposite House expands and deepens the intertwined themes she has dealt with from the start of her career: how loss (of so many kinds) shapes our identities–as individuals (even before we are born), as members of a family, as participants in communities–local, regional, national, and even cultural. Emerson gives us portraits of people from her world, a Southern, rural, working-class world that is changing faster than the inhabitants can understand–in other words, people like us even if we are not Southern or rural or working-class. Our heritage is always already gone, our birthright is sold for a mess of porridge, our houses fall down, our ways of life disappear, our food rots in the grocery store, we live by killing–animals and trees and one another, we wear masks to try to hide our true selves, our loved ones die–often in ways that lose them to us and us to them before their bodies finally stop, our body parts fail, and then we die, some holding on to one last fragment of a true moment, some leaping from the window because even a new-born child is not enough of an answer to how and why to keep facing a world full of “gravity, [and]… language, [and]… despair.” In the face of all this loss, Emerson also portrays the spectrum of our responses–curiosity, bitterness (these from the first stanza of the opening poem in Emerson’s first book), grief, anger, denial, acceptance, and, most frightening, the final word of The Opposite House, despair. I am tempted to see despair as Emerson’s final word on the subject. In a sense, how could it not be for all of us? In Margaret Atwood’s words: “Don’t be deluded by any other endings, they’re all fake” (“Happy Endings”).

The first section of The Opposite House is a catalog of the personal losses we see for those around us suffering. Emerson is, first, an unblinking observer of the world she embodies in her poems, often literally through the stories of individuals losing the world piece by piece through the failure of their own bodies. The section, to borrow the title of one poem, focuses on “Charting the Particulars” of so many kinds of loss. In that poem, a man who lost his leg fifty years earlier must acclimate himself every day to the fact that “the brain has never accepted it / and still sends down the most ludicrous / of commands, an itch on the missing shin, tickle / on the arch of a foot….” Emerson knows the psychology of facing the “unacceptable,” but she then ups the ante ten-fold by an associative leap: the artificial limb,

… the thing that leans
in the corner by the bed, …
… reminds him of one of his children newborn,
before he had reason to dislike it.

He knew,
of course, that it was his, but he found it alien
anyway—

Suddenly the poem not only charts particulars of the man’s life dealing with a lost limb but also the more universal mystery that in so many ways the brain can never accept or even fully understand not only our losses but the myriad realities of our lives and our closest relationships.

In “Torch,” Emerson gives us another individual’s catalog of loss, in this case a German immigrant wife losing her life bit by bit in a horrible cascade due to a brain tumor:

The tumor was pressed deep into the brain’s
left hemisphere, unreachable, like most
of what she thought she had forgotten or stored
reasonable away—the children’s things,
the years of the war, her youth, what she felt
about any of it.

The woman’s life is serially stripped away: first, actual things, then the memories of the past, then her own youth, and then, most terrible of all, her emotions. Later in the poem

her granddaughter disappeared
into someone she had never seen before.
She did not know her daughter. Speech
faded away; The English she learned late
left first.

A few more weeks, …
when those first, lingering words dissolved, she nodded,
sometimes, as though she understood:

What does she understand? She has lost all language; she has lost not only her family, not only the outside world, but her self and the tools with which to interact with the world. The poem’s close takes her back to a picture of the specific moment during a blackout in World War II when she meets “the man who will be the father / of her unimagined children” and he whispers to her to switch off the flashlight she has forgotten in her pocket. In that moment she understands the only thing left to her is to turn out the light—“and so she will.” At this point is death even a loss? Perhaps this ending is not exactly despair (the woman has lost even the emotions that could cause despair), but what about us? What is left to us sharing in the progressive losses the book as a whole charts?

The second section of the book is a brief collection of “Early Elegies,” eight poems, each eight lines long, lamenting the loss of once familiar things in our culture. Here, Emerson shifts our focus and our sense of loss from individual and relational losses to specific examples of how loss is part of cultural evolution. Emerson’s title names these poems “elegies,” typically poems of lament or mourning, and most of these (“Cursive,” “Barber,” “Operator,” “Drive-In Movie Theater”) do speak in a tone of loss. Not tragic loss, as in section one, but more along the lines of: look at these “exemplar” things disappearing before our eyes; notice that they are being lost, like it or not. Not all cultural loss is equal, though, and Emerson also shows that truth. “Wisdom Teeth” and “Smallpox” close the section and must at least hint that not all loss is really loss in the same vein.

So we come to the third section of The Opposite House. Emerson’s work often offers very dark view indeed. But Emerson’s career, and especially this volume, also serves to embody another response (beyond despair? despite despair?): we pick up salvageable pieces from the ruins all around us and make new uses of them. In the poem that shares its title with the volume, the “opposite house” is not that of the Emily Dickinson poem Emerson uses as the book’s epigraph:

There’s been a death, in the Opposite House,
As lately as Today–
I know it, by the numb look
Such Houses have–alway—

Dickinson’s lines show the way the fact of death colors how we, across the street, see the house, the world. Emerson’s title poem, like Dickinson’s, makes the place embody loss, or, more exactly, the way we see loss, but in Emerson the opposite house is “opposite” to Dickinson’s in that it is “a cavernous warehouse / of houses / dismantled, / cataloged, / reordered.” The bones of old houses are gathered for sale, for reuse in a new world. Imagine the suburban professional clientele drooling over weathered barn siding, the “aged, / orphaned — / artifacts of the / slower fires / of neglect, / abandonment,” now to be a stylish effect in the living room of a McMansion:

like
prizing gold
from the teeth
of the dead, to be
re-measured, leveled
grafted as though
re-made into
the agelessness
of someone else’s
household-now

If we are blind, we make art of the painted glass eye that cannot see but makes the empty socket more palatable to “the whole-sighted world.” In “The Ocularist,” Emerson gives us the voice of a maker of such artificial eyes:

One of the earliest
eyes was found
with the ancient
corpse of a woman
in Persia, hers
made of gold
to resemble
a small sun–
iris and sclera
chased rays–
clear testament
not to the eye,
but to the light
that had been
made go out.

Later in the poem, the ocularist makes a claim that can stand for Emerson’s work, too, and which perhaps offers us one kind of hope even in the shadow of despair:

So I aligned
the gaze
for the whole-sighted
world, that
it might find
some small fragment
of itself
contained there, already in
the brain–
I could make it
believe–the fact
of what was
not there of no
matter at all,
the final
measure of an eye’s
worth, in fact
its complete
disappearance–
and with it,
mine–into
the opposite
eye that was
such belief.

Such an ambition, to spend a life crafting an art(ificial) response to the inescapable varieties of loss that come to all mortal bodies that somehow becomes “worth” more than what has been lost.

In this third section, Emerson’s portraits explore a variety of making-new-out-of-old stories, of seeking salvage from the omnipresent decay at the crux of life: house sparrows, trapped inside JFK’s international terminal, not only adapt to a totally foreign world but “become the only natives / of this place, everyone else transient”; a prosthetic limb factory serves to question the relationship between made things and natural born; a rural mail carrier, whose job is increasingly irrelevant in the new age of email and online bill paying, keeps going against the imagined day he delivers “the letter addressed in a hand so far away, / so familiar, it would need no other understanding, / having found in me its last and only way”; and even salvage from the space shuttle Challenger’s explosion:

Something
did survive the fire, though, the fall, some
small canistered experiment involving
free-living creatures thin as eyelashes
recovered alongside a severed hand
still gloved, head helmeted; a form the size
of a comma was let to fall to that violent
reversal of the garden, unharmed….

To ask if these reclamations are enough is human; it is a question that drives so many of our responses of disbelief and bitterness; but it is also futile. That is the power of this collection. Emerson shows us ourselves without judgement and without flinching. She searches through the debris of the ever-changing world for the life that will go on, however changed, despite the fact that each of us will be, like the “astronauts [,] … scattered / piecemeal all over the Big Thicket.”