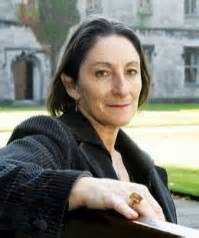 Mary O’Malley is an Irish poet born in Connemara and a native speaker of Irish. She was educated at University College-Galway and lived for many years in Portugal. She teaches at the National University of Ireland in Galway and has received a Hennessy Award, O’Malley has published six books, including The Knife in the Wave (Salmon, 1997) and The Boning Hall (New and Selected) from Carcanet in 2002. O’Malley lives in Moycullen.  “Violation” was first published in Shenandoah 51/2-3.

“I’d twist it inside out, this coil that led me on and on, and
brings me back
To the red bud of his buttonhole, a shower of red confetti.

Or to this scenario of her as Wolf, and me as Little Red Riding
Hood
Being gobbled up…”
-Ciaran Carson, Belfast Confetti

Blue grass can still be bought and so can “Le Must
du Cartier” in case you thought to ask
later in a different poem and “Je Reviens”
can still be sung.
This country of ours is violent
I think to myself this morning with surprise –
I only lately realized that dancehall fights
were not usual everywhere, nor everywhere excused
as young men going wild. I mean in Connemara, not Belfast.
Half-murdering your neighbor at a dance
at Christmas and St. Patrick’s Day
was not, it seems, considered de rigueur
for young men everywhere but there it is:

Women of good breeding in the West
retired after a good look from the balcony or a chair
to the toilets to repair the damage caused by sweat, fear
and excitement, as etiquette demanded.

I never understood the impulse to pulverize flesh
with bricks or bats but – let’s stick
to what we know – an arc just like a reaping hook and deep
opens across a dancer’s cheek, stops just below an eye,
follows a neighbour’s practiced crack, the whiskey bottle
smashed across a bench, and – “Say that again you bastard.”
This tableau surprised but did not shock.
Later I found the jagged weapon on the floor
marked “Paddy” like an English joke.

Those men had wives at home, and daughters,
were kind to me, respectful always.
We were schooled in such accommodations
as women made with men’s natures. Why is it then
I see the drops of blood like garnet beads
before a watery liquid joined the dots,
my neighbour’s eyes, feral, nothing familiar there but lust;
why then history’s black hags dive into our personal sky
at inappropriate times, the woods are full of hump-backed beasts
and all the lovely dancing girls emerge
from Kosovo and Africa and places around here
with their giggling dreams in rags around their breasts.