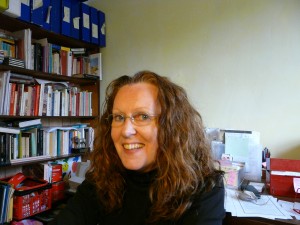 End of a young day in the bog
A bee stung my lip, punishment for staring for hours into tomb-shaped holes full of black water, after being warned not to. Going home I lay on the leather seats and watched the trees close over the car. Milk still bubbly from the cow lay in big lemonade bottles at our feet. Father told a story about setting a frog as bait in a bog hole and catching a pike with an eel through its fin. ‘All the bogholes and lakes down home are linked up,’ he said. Married ten years, he still called the farm ‘down home.’
*
Cousins from the city
Cousins from the city who were bigger and older than us stood by their car, anxious to leave, making dirty jokes we were too young to get. It was duskish, and the two sets of parents were having urgent conversations in the kitchen door: about their own parents, deaths, illness, money, jobs. Nothing as exciting as mysterious jokes about sex.
*
Summer job
I assisted Mike who worked in the yard at the back of the bottling hall, dealing with full bottles past their sell-by date, which had been collected from bars. The boys in the rattling-tinkling bottling hall said that Mike drank as much as he could from the bottles during the day. They considered this proof that the sell-by thing was just another capitalist trick.
*
A spell abroad
The scent from the huge Cestrum Nocturnum was sweet and sickly. Gabrielle called it Gallant de la nuit and said it gave her a headache. I said eating it made you trippy. Suddenly the muezzin sang out from the little tower of the nearest mosque, then quickly others echoed in the distance. I knew that someday somewhere I would miss this call and this moment.
*
Foreigners
She complained of the noisy people who’d invested the expensive apartment above theirs, with kids and maids and wedding festivals. She’d never dreamed such people could have the kind of money needed to purchase in their building. For a while she was sure they were only renting, until the father turned up, dark and mute, at a building meeting. ‘Those restaurants must pay well,’ she said, as she shook the small man’s hand.
*
Going to A&E
The young man hurried after the woman down the corridor towards Accident and Emergency. “Jingle Bells” seeped out of the public address speakers. “I’ll slice you,” the man shouted. The young woman ignored him. A passing white-coat paused, stared, then pressed on his way down the corridor. He’d have enough work to do when the pair arrived where they were headed.
*
Trust
His name was O’Brien or McMahon. Something Irish. He held his drink better than her. He was a doctor. He said if she held her breath the air would keep her up and that’s how she learned to keep herself afloat while criss-crossing a private pool under a blinding desert sun. She was three sheets to the wind, as she was for most of that summer. This too may have kept her from drowning.
*
Route bis, Béziers to Collioure
Sunday morning, as we leave Béziers behind, the road is lined with whores. The first, dowdily dressed, looks like a nun whose car broke down, although no car is visible. At each gap in the roadside reeds the women become younger; browner, bolder, barer. Some sit, most fiddle with mobile phones. Two black girls dance for us, one clothed only from beneath her breasts to above her buttocks.
*
A house in the country
I wonder if the dog tied up in my neighbour’s yard – who barks at postmen, strangers, cats, who rummages among the rubbish and comes up with mud on his nose – if he actually knows that the (mercifully lengthy) chain by which he is tied is a device of my neighbour, the dog’s adored owner and master, and not some essential part of his doggy condition.
*
Gabrielle’s story
The hotel’s oldest client insisted on having porridge every morning, something to do with Scots ancestry. He drove her out in the New Jersey evenings, in a car so old it made her laugh. They drank cocktails along the coast in hotels that don’t exist anymore, with big sofas and fading upholstery under pillared verandas with cracked paint. She was bored at the time, but now realizes how beautiful it all was.
*
The end
The nurses’ aides leave my pyjamas perched on the side of the laundry basket, soiled side up, in accusation and evidence. Only the aides and cleaners frequent the bathroom. I decide the aides are trained to behave thus, so that their client will change his ways or that others may chastise him. I can no longer do much about how my bowels behave, so I ignore it. I am finished dealing with things.
*
The sleepwalker
Wanderer, there is no road
Only wakes upon the sea.
– A. Machado

In early adolescence, Gabrielle walked in her sleep for a while. Later on, she sleepwalked all the time, in a different way. She sleepwalked through university, travel, early jobs, marriage, several houses, several countries, several children. When she finally woke up, she was in a cemetery in Collioure looking at Machado’s grave.