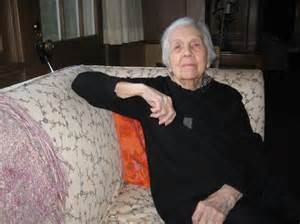 Eleanor Ross Taylor (1920-2011) published six collections of poems between 1960 and 2009. Though obscure for many years, she was “discovered” in 1998. and her work quickly became widely known and praised. Southern, experimental, feminist, intricate, her poems a full of history, especially as it concerns white women in a patriarchal white supremacist South. The Carole Weinstein Prize, the Ruth Lilly Prize and the William Carlos Williams Award are a few of her honors, and most of her poems from the first five books can be found in Captive Voices: New and Selected Poems, 1960-2008, edited by Ellen Bryant Voigt (LSU, 2009).  “Sparrow Eats Chicken Wing” first appeared in Shenandoah 48/2.

Roses snag bricks, hook hats.
The caretaker does not smile.
The hostess does not cook.
We, overdressed,
might layer down to Jefferson,
to Berkeley even,
jug shards of Jamestown.

A hiss — Samantha!
A porcelain on the lawn, holding
initiated fork, bird occupied.
Won’t shoo.
His graceless neck jerks.
Bony bill, a bit, dissecting, jabs,
His wiry toes astride
the crust wing.
Not one futilely fluttering ringed claw
can make him quit.