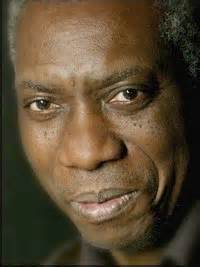 Yusef Komunyakaa was born in Bogalusa, Louisiana and served in the U.S.Army in Viet Nam. He has taught at Indiana University, Princeton and NYU. Jazz, Southern culture, race, war and ceremony all play an important role in his many books, which include Copacetic (Wesleyan, 1984), the Pulitzer-winning Neon Vernacular (Wesleyan, 1993) and Taboo (Farrar Straus and Giroux, 2004). His most recent collection is The Emperor of Water Clocks (Farrar, Strauss and Giroux, 2015). He has also received the Kingsley Tufts Award and the Ruth Lilly Prize.  “Jasmine” first appeared in Shenandoah 50/3.

I sit kitty-corner on the stage
as Elvin’s sticks blur the club
into a blue fantasia.
I thought my body had forgotten the Deep
South, how I’d cross the street
if a woman like these two walked
towards me, as if a cat traversed
my path beneath the evening star.
Which one is wearing jasmine?
If my grandmothers saw me now
they’d say, Boy, the devil never sleeps.
My mind is lost among November
cotton flowers, a soft rain on my face
as Richard Davis plucks the fat notes
of chance on his upright
leaning into the future.
The blonde, the brunette –
which one is scented with jasmine?
I can hear Duke in the right hand
& Basie in the left
as the young piano player
nudges us into the past.
The trumpet’s almost kissed
by enough pain. Give him a few more years,
a few more ghosts to embrace – Clifford’s
shadow on the edge of the stage.
The sign says, No Talking.
Elvin’s guardian angel lingers
at the top of the stairs,
counting each drop of sweat
paid in tribute. The blonde
has her eyes closed, & the brunette
is looking at me. Our bodies
sway to the jasmine rising
from a valley somewhere
in Egypt, a white moon
opening countless false mouths
of laughter. The midnight
gatherers are boys & girls
with the headlights of trucks
aimed at their backs, because
their hands refuse to hurt
the scent hidden in each bloom.