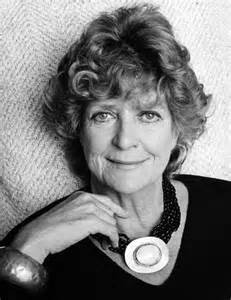 Carolyn Kizer (1925-2014) was a founding editor of Poetry Northwest and received the Pulitzer Prize in 1985 for Yin. She taught and lectured widely and was a feminist writer and spokesperson widely remembered for Mermaids in the basement: poems for women. Her final book was Cool, Calm, and Collected: Poems 1960-2000 (Copper Canyon, 2001). Her poem “Eleutheria” was first printed in Shenandoah 49/2.

She was named Eleutheria,
Which means “Freedom” in both ancient and modern Greek.
In translating it, she altered the meaning.
Freedom was not in her vocabulary.
Hers was a jealous nature; she didn’t care
For the poets who were her husband’s friends.

“Aren’t you afraid to visit them,” she mocked,
“Afraid you’ll track in shit on their fine rugs?
You leave me alone in this wretched shack
With your bawling brats
While you flee to the elegant home
Of your stuck-up friends, to recite your poems.”

Once he confessed to us that he had married her
Because he believed he couldn’t do better,
Being plain and provincial, a shy, awkward man,
Except on paper, where he was as light-footed
As the elusive muse who danced in his mind.

He worked so hard he was always tired,
Hoping a drink or two might give him relief.
It must be admitted
That sometimes he beat his little sons
Whom he adored, pleading for quiet
So he would have freedom to write.

One morning as he left to teach his first class
Of unruly students – far too many
For the pittance he was paid –
Eleutheria followed him out of the door
As he stepped, all nerves, into the snowy street,

Clutching his shabby coat that had lost its buttons
And the ancient briefcase with a broken clasp.
She leaned close, as if to kiss him
But instead she whispered, “You’re not a man.”

She was no fool; she knew he wanted freedom,
So she began to threaten: “If you leave me,
You’ll never see your boys again.”
So he hung on, but at last, pushed to the wall,
He left her.
And it was as she had predicted:
He didn’t see his boys till they were grown.

He moved; and he was so lost to us for years,
Though we saw his face in literary journals
Whenever he had won another prize.
We read the praise of each new book
That he faithfully sent us, tenderly inscribed.
Sometimes his poems and letters would begin,
“When I lost my sons…”

If we ran into him, he was as loving as ever,
And when we could, we resumed those old evenings
Of poetry, ours and his, and the writers we admired.
We knew when he was getting truly drunk:
He would slip from word-for-word quotations
Of Samuel Johnson, to poetry in German:
Rilke and Trakl; we didn’t know the language
So, brilliantly, he improvised translations,
As we were enthralled by that amber voice
Full of passion and tears.

Famous and lonely, he went on like this for years….
But this poem began with Eleutheria,
And will close with our last encounter
At a poetry reading by one of her sons;
When she came over,
I said to a man who knew both of us,
“I have nothing to say to her,”
And I looked right through her.
At once she moved from the seat next to mine
While I sat stunned by my own behavior.

Of course by then our friend was dead,
Prematurely, a victim of his hard life
And that hard woman
Who had given him his freedom.
I discovered later that Eleutheria
Had become a marriage counselor.
A marriage counselor!
Do we thank God for irony, or curse it
When it comes too close?
We are free to choose. Eleutheria.