Eat a Pancake, Eat Your Joy 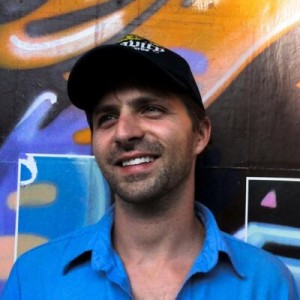 Nick’s fiction has appeared in Narrative, ZYZZYVA, Oxford American, Confrontation, All Things Considered, and elsewhere. A graduate of the Rutgers-Newark MFA Program, he now works as a mentor for the writing program We Are Not Numbers and lives with his wife above a lovely garage in Venice Beach.

Selena made it sound easy. All I had to do was place a pancake in my palm, high-five her, and repeat some sort of mantra. We were at IHOP, in a window booth, waiting for my food.

“Then what?” I asked, breaking into giggles. Selena was so weird.

“Then nothing, darling. That’s it. You’re ordained.” She winked, mixed ice water in her coffee. She was on her third cup. I like to count things, keep track.

Selena had found me earlier outside the Greyhound station. I say found because it was two in the morning and I was stuck in Vegas, broke, sober and bored, which was just about as lost as I’d ever imagined myself. The bus had broken down, something wrong with the radiator. New parts were on the way. The other passengers who’d ridden from Sacramento were either sleeping in the station or gambling at the Plaza next door. To kill time, I went outside and counted the burned-out bulbs in the Plaza’s flashing sign. If you’re wondering why I didn’t walk the Strip to see the sights, you must not be familiar with Greyhound stations—always at the edge of town, nowhere near the fun and games—and for this I congratulate you on the choices you’ve made in life.

That I wasn’t smoking made me think he was interested in more than cigarettes, and in this I was correct. He asked all the usual questions: how old are you? What do fellas call you? Where you headed? How much for your love? I knew from his voice that he thought I was a boy. I get it a lot from men. I don’t blame them. Folks see what they want.

Selena appeared right then, threw her arm around me like an old pal. “I’m starving,” she said. Her heels clacked as she marched us down the sidewalk. “You like IHOP?”

The pancake squelched between our hands. Selena knitted her fingers with mine, squeezed harder. Syrup dripped on the table with that velvety patter you’d recognize from melting candle wax. The waitress yawned behind the counter.

According to her, I was now a Pancake High Priestess.

She didn’t bother with a napkin before going back to her coffee. She watched the flash of my fork and knife as I dug in. “You’re gonna be good at this, darling. I can tell.”

She had a decade on me. Early thirties, I would’ve wagered. Long black braids. Thick lips. Amber sea glass eyes. Stylish skirt, jacket. Very pretty. You might’ve called her a lipstick lesbian, but I don’t think you’d be right. I’ve learned to read people. Friendly, older women used to take me in. Turns out they’re not always so friendly. My memory has snipped the worst frames from the reel. For this, I suppose I ought to be more grateful. What I’d become was weary. But Selena didn’t care where I was headed, where I was from. Didn’t ask my name. These acts of charity made me the most grateful of all.

She rattled the ice in her mug. “Darling, you know Spanish for bread?”

“Pan,” I said. Everybody knows Spanish for bread.

“Bingo. What about Greek for all?”

I looked down at my plate. Eat the center of a stack of pancakes and what you’re left with is a crater to fill with syrup. You probably know this trick already, but the novelty was new to me.

“Pan also happens to be the name of the old goat god who looked after the wilds and the nymphs.” She waved her spoon overhead as if it were a lasso and there was a calf that needed roping. “All around us, both sticky and sweet. Nothing wrong with that.”

Then she glanced at the wall clock, cursed. “I’m on, in ten, darling, gotta scamper.”  She stood and blew me a kiss.

A twenty fluttered from her handbag as she left. I knew before the bill touched the table that I would take that object of Selena’s and make it mine. I felt sorry for the waitress. I did. But there were other things for which I felt so much more.

Hustling back to the Greyhound station, the blinking sign of the Plaza set my mind to the roulette wheel. Selena’s twenty plus one decent streak of luck was everything I needed in the world. You might say I ought to have known better, and ordinarily I’d agree. But let me tell you about me and luck. By my accounting, I had lots owed me, heaps of good fortune due my way.

Suddenly this young kid, my age, his face one big blister of a sunburn, sidled up to me and spilled his story, as if I’d begged to hear it.

He’d hoofed it from Bakersfield. Five days on foot in the name of love. His girl had left him, moved away. He figured he’d prove himself by walking to her. Nearly passed out in the Mojave earlier that day. Had to stand at the roadside, his thumb to heaven, praying for an angel to sweep him up. As these tales always go, one angel did.

I waited for the real proselytizing to begin, but the kid only grinned. I looked him over. No bags. Just his peeling face, his ratty sneakers. I didn’t doubt a word.

“Won’t know till St. Louis. She’s waiting for me there.”

His pilgrimage had hardly begun. I briefly considered giving him my bus ticket. The forces we try to control. The lessons we’d love to learn.

“You hungry?” I said, thumbing Selena’s twenty. I nodded back in the direction of IHOP.
“You gotta be starving.”

3 Responses to Eat a Pancake, Eat Your Joy