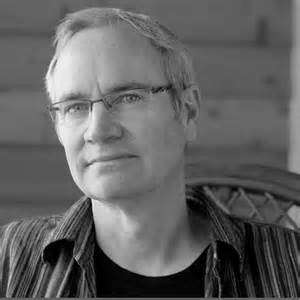 Michael Chitwood was born and raised in the foothills of the VA Blue Ridge Mountains but now works as a freelance writer and college lecturer in Chapel Hill, N.C. His many books of poetry include Salt Works, Whet,  The Weave Room and Gospel Road Going, which received the 2003 Roanoke-Chowan Award. His poems can be found in Georgia Review, Poetry and many other venues.

We called them The Bible Couple
because they had one,
a spiffy leather-bound number with its own latch
that snapped front cover to back
as though the gospel were a snake
that had to be secure din its carrying box.
They brought it every day with their towels, umbrella, suntan lotion
And little cooler of six Mountain Dews.

Here’s their drill. After they’d get the umbrella and towls set,
they’d read the Bible together, on their stomachs, side by side,
with the intensity of Boy Scouts scouring a prono novel by flashlight.
Then they’d neck, his tongue searching her mouth
as if it were looking for words to offer God.
After a while they’d go for a swim. Actually not a swim.
They’d go in up to their chests and hug while the waves
made them bob like buoys marking baited traps.
I’m thinking only people who aren’t screwing
kiss like that, that long, that hungrily in public.
Was it faith or fear of banishment,
an angry congregation learning what they did on summer vacation
that keep them so starved for each other?

On our sixth day, a thunder storm drove us in and from my porch
I could see Adam and Eve locked up on a porch across the street.
Rain worked through the tarpaper,
and while they spoke in tongues,
it drummed a temporal tattoo
on the curved Styrofoam belly
of a dropped boogie board.