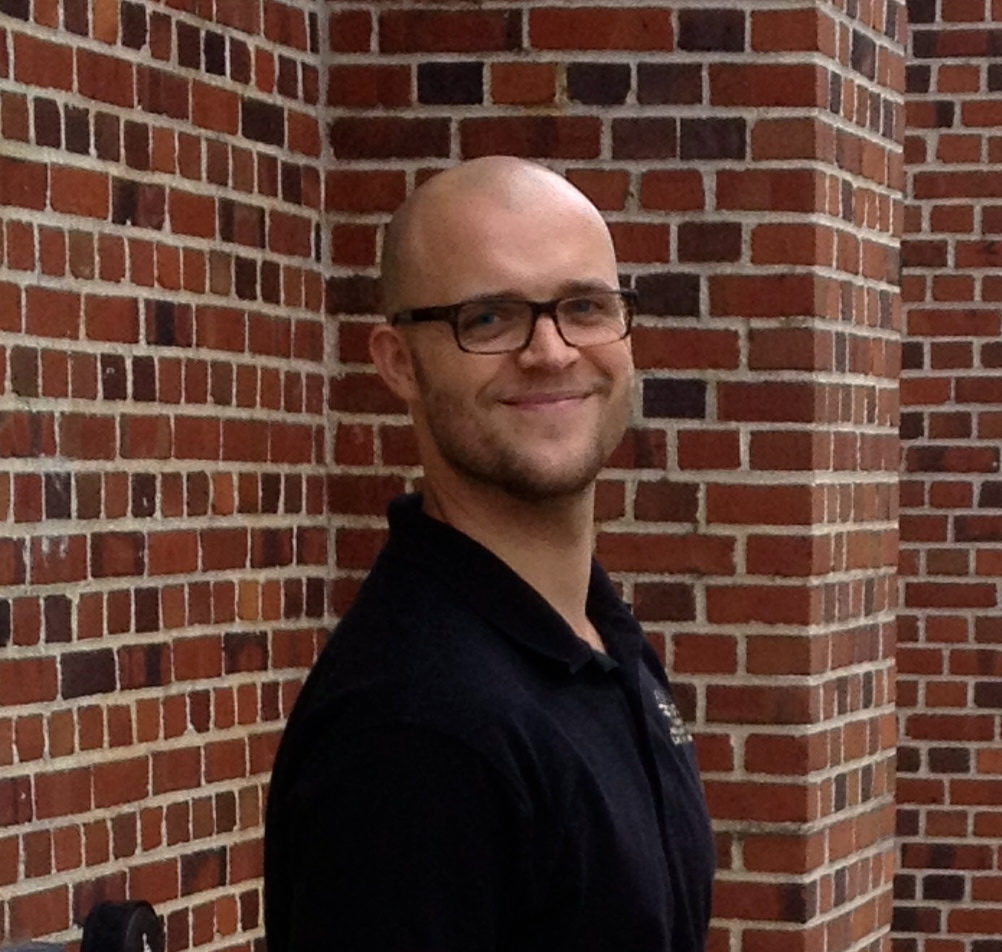 Danilo Thomas attends the PhD program in Creative Writing at Florida State University. Raised in southwest Missouri, he received his MFA in fiction at the University of Alabama where he was fiction editor of Black Warrior Review. He has taught in Alabama’s maximum security prisons through the Alabama Pris Arts+ Education Project. His chapbook MURK was published by book artist AB Gorham. He has been a finalist for the Italo Calvino Prize in fiction and published in Sleepingfish, apt, Moon City Review, Bull and Juked.  “Torque and Slippage” is runner-up for the 2014 Bevel Summers Contest.

Flathead Screwdriver
Highway 93 took its frenulum curve between the jaws of the Mission Mountains, down the valleys throat to the southernmost reaches of Flathead Lake. Polson, Montana. It was a little after ten in the morning. The day was a clear blue over the mountains, pine char tinted the air, the continuous lapping of water drummed the shores, and his skull caved at the left orbital, the impact causing linear fractures through the sphenoid and temporal bones of his skull. His lungs had cooled, filled with the clear cold water that made the lake appear deceptively shallow. At any point, out there in a boat, the bottom seemed only a little more than ten feet deep, the trout swimming below, a good two feet long. It was a joke that locals played on tourists that ended tragically ate least once every three years. It was the floor that the young men and women were seeing, and the fish, too. But the bottom that they were sure that they could reach could be as deep as 370 feet. The good-sized trout? 40 inches and 38 pounds. It was always the ones that felt that they had the most to prove to the Montanans that drowned. The locals were tough boys and girls, some without a pot to piss in, but still commanded respect by smoking and drinking and dipping, gutting fish or guiding an outboard motor. They were all good looking, too, and most times, they could get a tourist, thirsting to be let into their mangy pack, to go against their better judgment.

This wasn’t Bull Child, though. He had raised the pack on the Salish-Kootenai just south, and there wasn’t a kid in the parts who didn’t owe him a favor in one fashion or another. He had warned us, though, asked us to come up the night before. Me and Keebles had gotten an early start into things and didn’t make it out the door, and if we had, would have ended up in a ditch alongside Highway 93 with the rigging of some asshole’s sailboat threading our guts, the poop deck having sliced us in twain. Road’s bad enough sober. We told Bull Child to wait. All of us were suspicious about the excess and extent of the threats that had been made. Figured whoever it was that was talking was talking pure bullshit. Then we claimed his body. No one expects things to go that far.

Bull Child was on a steel pan in the Polson morgue. The doctor opened a square metal door and wheeled him out. He had long red welts on his throat.

“Tried to cut his throat with something metallic,” Officer Butterfly said. “Must have been kind of dull.”

Keebles felt along the ridges running from Bull Child’s Adam’s apple to his ear lobe. There were five scrapes, progressively deeper. When the skin didn’t open, they dumped him unconscious in the lake.

“The official cause of death is drowning,” the man in the white coat, presumably a doctor, said, though he hadn’t introduced himself. “But he probably would have died of exposure. It dropped down to 28 last night.”

The doctor boasted the temperature like the harshness of the climate was amusing, or reassuring in some way. He was right. You could always depend on it being cold.

“His mother wants him cremated,” I said. “You can call his father for money. He lives in Big Fork.”

I touched Bull Child’s forehead, and it was not yet as cold as I would have guessed.

Phillips Head Screwdriver
Bull Child’s sister, Dovegirl, was where we thought she would be, and when we came in the door she threw a plate at us before Keebles tackled her. He restrained her by holding her firmly, as he rolled into the shards of ceramic on the floor. He didn’t hurt her, and she calmed down then, held in his arms like a wounded animal, her fight spent, needing the help. She put on some clothes. She splashed water on her face. She ran a wet comb through her hair, and told us to head northwest, toward Kalispell.

They were staying at the roadside motel farther up 93 with the huge neon sign, a cowboy lassoing the words El Rancho. The motel was a memory of the people that used to visit that far south of Whitefish. The land was marshy on the west side of Flathead and tourists hadn’t bought it all up yet. They used to visit to tell stories about the ranches with cattle. But the ranches disappeared into the isolation and the mountains because the ranchers couldn’t stop the cows from shitting, the shit from attracting the flies, and the flies from biting the arms of the tourists who would not remove the fingers that blocked the stench from their noses. The Missions were still set there like the teeth of a terrible trap, serrated all around us, waiting for the pressure to set them off. Keebles thread a rag around a wire coat hanger and stuffed it into their gas tank. He lit their car on fire. When they came through the door, Keebles stabbed the first one in the chest with the screwdriver he kept in the glove box. It glanced of a rib and ripped out a string of oblique muscle. The man dropped. The second man ran back into the hotel room. It was dusk, and the frost forming on the vinyl ceiling of the foyer melted next to the rim of light that heated it. For whatever reason when the man in the motel room took up his baseball bat, he decided, first, to send the glass out of the motel window like shot gun spray. We stepped back and he came after us, swung hard up and down, up and down, and brought the bat down into the asphalt. The lot chipped and scratched skin from Dovegirl’s cheek. Keebles stabbed the man in the face. The blade glanced off of the man’s forehead, turned Keeble’s wrist, and tore the shank downward, into the fat of the man’s cheek. The man dropped the bat and started screaming, the screwdriver threaded through his face like an upholstery needle. The blood gleaked out and then flowed when he pulled it out. Dovegirl spit on him. We didn’t have it in us to do any more than that. As if that wasn’t bad enough.

Allen Wrench
We had made some noise up on the Res when we heard that some transplants had taken a shine to Dovegirl. It started with lurid texts, dick pics and such, and ended up with three tank tops on top of her in the bathroom of The Rose before the bouncer broke the door down. She had been holed up in her basement, afraid to go outside since then. They said they would kill her if she said anything. She knew of girls getting roughed up around the Res. Roofies. Threats. She heard about it all happening as far away as Missoula, and as close as Ronan and Polson. If it could happen in those places, where girls weren’t always brown and some even had money, then it sure as shit could happen on the Res. So we lifted a few door handles and left what was inside a bit worse for wear. But we left it alone after that, figured it was over. That’s how it usually goes. At the worst, someone comes looking for us in Missoula and then it ends. But this type of escalation? Bull Child dead. Keebles stabbing up those dudes? My hands dampened. I was assembling a desk that we had repoed from one of UM’s dumpsters when Keebles came into tell me the men from the motel had lived. We weren’t killers. I thought about that then, sitting in my room, that we weren’t killers. We had been afraid to call at first, wondering at our own accountability, but had eventually called Officer Butterfly to tell him where the men were located, and what we had done to them.

I fit the torque wrench’s hexagon head into a screw and turned until the head stripped out, and then grabbed another.

Star Head Screwdriver
Who knows why we do anything? If anyone would have told me when I was twenty-seven that I was going to die out on Tarkio Road under the stars one dry fall evening I would have called bullshit. I am destined for greater things. I wanted to do greater things. But my not wanting it this way doesn’t keep me from clutching a handful of dirt and coming up with rust in my fingernails as Montana’s famous sky tightens slowly down on me. All those stars seem to slowly pivot, and I swear I can see the bottom. My head is not quite sound. My jaw feels wet. Who knows when death starts? All of the actions involved in it, one minute to the next? For example, I don’t even know these people and then, there they are, that first domino has been flicked and I am waiting to see the pattern the falling tiles make. Waiting for what inevitability shapes into. The door shuttered into the kitchen and vibrated so hard that it came off its hinges. I through a bag of flour, and before the pipe hit I laughed at the man, his beard frocked, his skin antiqued, and his wet eyes, reddened slits like those of an albino rat. We avoid existential thoughts because they are constant with this world, and anxiety inducing if not just unoriginal. And so we focus on matter. On the really real of things.

I had never heard the sound of a door breaking open. Never felt a knife rip into my ribs while swooning in a slick of my own blood. I have never felt helpless. There was a car ride, the tires ticking cracked interstate asphalt, and crunching gravel. The trunk opened. The air was cold and the moon bright. Everything felt crisp. They stood me up in the road and drove a shank into my groin. It grazed my pelvis. They let me drop to the road, and the blood is warm. I worry about Keebles. I laugh a little about the first men that try to touch him, and I wonder whose hands will search through their own blood for the answers to the riddles that they have made for themselves here, tonight, at the end of their lives? What will they scribe in the widening pools with their fingertips as the blood starts to thicken? Who will end up in the dirt, and what ground will the bodies fall on? Where will soil and blood be rinsed from knuckles and spades? What is this tension that builds in the chest; that slips so assuredly from between the teeth? Where does it go? Why do we try to save each other?