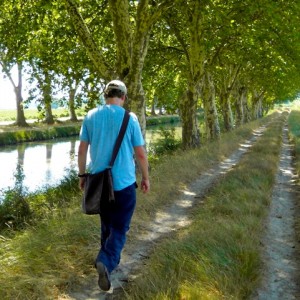 Simon Trowbridge was born in Oxford, England, and educated at King’s College, London and University College, London.  He has recently published The Rise and Fall of the Royal Shakespeare Company (EdAC, 2013).  He is currently writing a novel and a biography of Jean-Phillippe Rameau.

That winter, the last of the war, the river froze over and stray dogs died where they lay. The scarcity of wood meant that fires could only be lit for a few hours a day. Even in the wealthy quarters people had started to break up and burn their furniture.

In an apartment in the 16th arrondissement a young musician called Iris Dalbert wore her overcoat and fingerless gloves as she sat at the grand piano. She couldn’t bring herself to practice; instead, she walked over to the balcony windows and looked out at the plane trees and the white rooftops. In the café opposite she could see a woman sitting between two soldiers. When the woman leant forward she recognised the smiling face of a girl she had known at school.

The housekeeper came in to clear away the breakfast Iris hadn’t eaten.

‘Is my father still here?’

‘He left earlier than usual.’

She returned to the window. The girl was leaving the café. Her mouth seemed very red in contrast to the monochrome setting. As she crossed the street she bumped into an elderly man, sending his hat flying in a gust of wind. Iris smiled, for the old man was her teacher.

She sat on a settee and waited. When the professor entered the room he was still cursing the young woman.

‘You had a lucky escape,’ Iris said, taking his hat.

But he wasn’t one for small-talk. He pointed at the keyboard.

‘No, we’ve gone through these pieces a hundred times.’

‘We still have to decide on the piece for the encore.’

‘I have something in mind.’

He was struggling to come to terms with the fact that she was no longer a child. ‘This is no good. The encore is as important as the rest. But as the rest is very serious, sombre even, you should play something witty and light that will delight your audience. A Mozart or Haydn allegretto.’

Iris respected her teacher, and tolerated – at least in his presence – his lack of understanding of both her and of the world around them. She didn’t care to pander to the collaborators who would occupy most of the seats.

To get rid of the professor she agreed to play the Mozart. Soon after his departure she walked the short distance to the conservatoire. She waited in a long music-filled corridor for her friends Carole and Paul to emerge from a class. They went to their favourite café, a small hidden away place, and huddled together beside one of the heaters. She told them that she hadn’t changed her mind and that they should meet her outside the stage door immediately at the end of the performance. Carole said, ‘I don’t know.’

‘It will be all right. It’s a small gesture.’

They shared a packet of cigarettes. Iris hurried home in the fading light. Now that the concert was imminent she started to prepare. She sat at the piano and played a few pages of the Brahms. In her bedroom she changed into a black dress. Her father had given her a pair of stockings, but she knew where he’d got them and refused to wear them. She slipped her bare feet into a pair of expensive high-heeled shoes that had belonged to her mother.

The car came for her at five. In the theatre, after the necessary formalities, she walked onto the stage and faced the auditorium. Empty and red, it made her think of an open mouth. She turned to the piano. She was pleased. The instrument had been expertly tuned so that the tone was both warm and ringing. She retreated to the dressing room, and lay down on the narrow bed to rest. She was woken by the stage manager, a young woman called Teresa. ‘It’s nearly time.’

‘Yes. The professor came but didn’t want to disturb you.’

‘He called. He said he’s been delayed.’

She went to the mirror. ‘Do I look okay?’

Teresa carefully re-tied Iris’s hair, and knelt to check the hem of her dress. ‘You look beautiful.’

Iris followed Teresa along the corridor and down a flight of stairs into the wings. She looked at the black piano, and allowed the stacked rows of figures beyond to remain faceless, only registering that each uniform, black or grey, was separated from the next by coloured cloth, skin and diamonds. As she walked out onto the stage she looked at the piano as if it represented safety, and her acknowledgement of the audience was so brief as to be cursory. Impatient, because anxious, she began to play before the audience had settled and at once her concentration on the music was so complete that all other thoughts were pushed from her mind. At the end of her programme the applause was enthusiastic. She walked off the stage. Her teacher was pleased: he kissed her on each cheek. She walked back to the piano and began her encore, the first of Mendelssohn’s Lieder ohne Worte Opus 19. About half way through she became aware of a murmur of anxiety. At the edge of her vision, she could see a blur of heads turning. She kept playing. A man in a black uniform had risen. He spoke in the manner of someone who was used to being obeyed, and the malignity of his stare was felt acutely by the slight girl who was its target. The ugliness of his foreign voice growled above the general chorus of discomfort and disapproval. ‘Disgrace… How dare you play this filth? Someone stop this Jew-loving bitch…’ She continued to the end of the piece, and then walked off. The old man, devastated and close to tears, slapped her. She pushed her way through the small gathering of theatre staff and ran down the stairs to the stage door.

Outside, Carole and Iris embraced and Paul gave Iris his coat. Without speaking, they headed in the direction of the river. This close to curfew the side roads were near-deserted, and dark. A youth on a bike, speeding without lamps, swerved to avoid them. The red tip of a cigarette flared in a doorway and revealed, for a moment, a gaunt face. Their sense of elation was fragile, and such encounters spooked them. On the other side of the river they entered a quarter of closed bookshops and small galleries. They stepped through a wooden doorway into a courtyard and climbed the stairs to an apartment on the fifth floor. The apartment belonged to the family of Paul’s girlfriend, Iris’s closest friend, arrested and deported to the east only a month before. The friends drank wine, but spoke few words before going to bed. Early the next morning, Iris left the others sleeping and made her way home. She felt sick but mostly numb, and it was this sense of disconnection, enhanced by the grey light and unnatural silence, that propelled her so calmly towards the cars waiting outside her building.