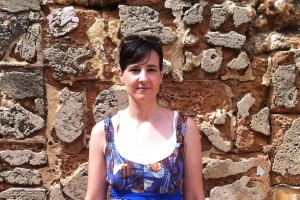 Katherine Dykstra’s essays have been published in or are forthcoming in Gulf Coast, Brain Child, Crab Orchard Review and Poets and Writers.  She won third place in the 2013 Real Simple Life Lessons essay contest and first place in the 2012 Waterman Fund essay contest.  She was one of two finalists for Crab Orchard Review’s 2014 John Guyon Literary Nonfiction Prize.  A nonfiction editor at Guernica, she is at work on a memoir.

They found the hiker in the sulfur mine the week before Parker and I arrived. He had been slumped against the wall of the cave, perfectly preserved — clothes intact, hair in place — mummified by the same yellow fumes that had knocked him out.

My father, who had given away everything he owned and decamped to the island, remembered when the man, an American eco-tourist, disappeared. He recalled the bevy of women who floated over in the little propeller plane to oversee the search. They’d picked through the uninhabited leeward side of the island, waded into the surf at sea level, broken down doors in shacks long abandoned and tucked deep in the rainforest way up the mountain, turning up nothing.

As my father told the story, his blue eyes sparkled like the Caribbean Sea before us. That someone could get lost on five square miles, among less than 1,500 people. Magic, he said. Poof.

My father looked so different since I’d last seen him. The island air had turned his brown hair steel grey, his once pink skin the color and texture of an almond. His voice was the same, pointed and low, but his vocabulary had changed, concerned as he was now with things like hurricanes, the water level in his cistern, and whether the boat that delivered food to the island could sail today. He felt far away even as I sat beside him. I reached for Parker’s hand.

Walking through Windwardside, we ran into the man who’d discovered the hiker. Though we didn’t know that until after he’d walked away and two girls called out to my father, “Dr. Dykstra, Alex was the one!”

“The one who found the hiker!”

Alex was husband to one of my father’s medical students, biding his time on island by learning to scuba dive. He’d trekked to the sulfur mine with two friends. When they stumbled upon the hiker, they had been turning circles themselves, the rock walls repeating. What it must be to be lost and find death itself.

Not long after he moved, my father paid cash for a cottage in the local style — white clapboard, pink roof, green gingerbread. He told me that he planned to live out his life there among the banana trees, that when he could no longer haul himself up the steep stone path that led to his house, he would hire one of the local women to tend to him. Then someday, he’d said to me, you’ll have a house in the Caribbean, as if this made up for the distance between us.

We three hiked to the mouth of the sulfur mine ourselves one afternoon. Wended through the rainforest and onto a footpath down, down, down, to a shadeless hill that hung way out over the ocean. Before us, a panorama of sea and sky. The wind whipped around the mountain with such force that it caught in our ears, muffling the sound of the surf crashing into the rocks below.

My father, leaning hard on his walking stick, led us down a dusty trail around a bluff, the immovable rock of the mountain on our right, sheer rolling cliff on our left.

The mouth of the cave exhaled heat and burnt matches, which stung my nose and pressed on my skin even ten feet away. A sign had been pounded into the ground before it: “Sulfur mine closed until further notice.” Parker walked around it and into the cave’s maw. I followed him into the darkness and saw two options, right and left.

My father had told us that the hiker had had a rope he’d affixed to the outside, but that it had come untied, so when he tried to follow it back out he only found its end. He’d also heard that the hiker was found just around the first couple bends. Meaning he had been disoriented, but not really lost at all.

Parker started to duck down one of the branches and my heart knocked fast against my chest.

I grabbed his elbow and felt that I had saved him. Though I knew that really only you can save yourself.