The Hitchhiker’s Guide to the Galaxy by Douglas Adams

Nick Smith is a senior English and History Major and Creative Writing minor from Alexandria, Virginia. Nick loves all flavors of literature, but he has always had a fondness for science fiction and fantasy, especially when paired with comedy. 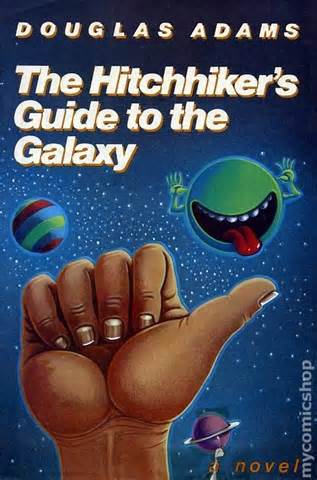 Douglas Adams’ Hitchhiker’s Guide to the Galaxy is a great example of comedic social commentary; it is very easy to read for humor, but it offers deeper social commentary, should the reader desire it. Originally created as a radio story, the first installation was compiled and printed in 1979 as a novel. Adams’ story follows the adventure of Arthur Dent an exceedingly average Englishman, and his friend and Ford Prefect, (revealed to be a stranded alien just prior to the destruction of Earth) who escape the ruin of Earth by hitching a ride on the spaceships that blew it up. Arthur and Ford proceed to take a seemingly random ride through space, meeting the president of the galaxy, finding out the meaning of everything, and running into Arthur’s ex-girlfriend. In the course of their adventure, Arthur learns to appreciate the wonderful disconnection of a universe driven primarily by greed and personal advancement, often portrayed through caricatures of human personalities.

While many authors would shy away from such obviously extreme plot devices, Adams layers them in as heavily as possible. In a stark exclamation of style, he produces irreverent humor from the utter improbability and chaos he creates. Similarly, not many authors could pull off something as bold as blowing up the Earth in the introductory chapters and still make it both hilarious and agreeable to the reader. Adams’ direct, almost deadpan comedy highlights his message about the general silliness of society, even intergalactic ones. He couches his commentary comfortably in metaphors that point out the hilarity of disproportion humanity faces, such as “‘Space,’ it says, ‘is big. Really big. You just won’t believe how vastly hugely mind-bogglingly big it is. I mean you may think it’s a long way down the road to the chemist, but that’s just peanuts to space’”. In every aspect of this work Adams strives to invoke biting satire about the human condition, the enormity of the galaxy (both in terms of size and seriousness) outside of mankind, and, especially, politics.

Several supporting characters, such as Zaphod Beeblebrox, the incompetent (and valued for being so) celebrity president of the galaxy, and Marvin the depressed existential android contribute to the cast, creating a mélange of character development and criticism. On the surface this novel appears to be nothing more than a slightly nonsensical comedy, but if read carefully, Adams’ wit evolves into something broader. This work is slightly older, but the themes are just as fitting today as they ever have been. Hitchhiker’s Guide to the Galaxy should be read at least twice, once for the inherent beauty of Adams’ comedy, and again for his subtle and scathing opinions on the contrivances of “modern” life once the reader is in on the joke.