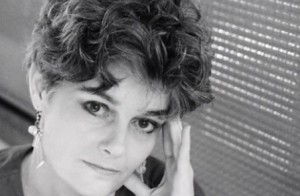 Former Eudora Welty Professor of English at the University of Wisconsin-Madison, Kelly Cherry is a prolific writer of poetry, essays and fiction. Her many books include Death and Transfiguration: Poems (LSU, 1997), The Life and Death of Poetry (LSU, 2013), The Woman Who [Stories] (Boson Books, 2010) and A Kind of Dream [linked stories] (2014). She received the Carole Weinstein Prize in Poetry in 2012, and a new collection of poems, Quartet for J. Robert Oppenheimer, was recently released by LSU.

A turquoise sky, its overflowing light
splashing down on buttes, mesas, mountains,
ravines, arroyos, canyons, caves, and flats,
white sands where scaffolding abuts the sun
and engineers are measuring the space
between annihilation and the view.
Oppie’s porkpie hat shadows his face,
a skinny rabbit leaps out of his way.
He’s nervous, tense, afraid that something will
go wrong — there is so much that even now
can go wrong.  There is the question of fallout.
He hugs himelf while smoking, arms crossed,
a pose so characteristic, so often noted,
that actors who play him do the same.  The flood
of light is only a metaphor, of course.
In general, deserts are dry, and men
measuring white sands are a mirage.