The Window Above Superior 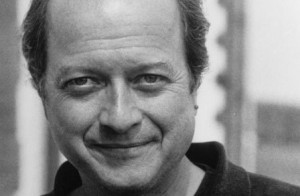 Sherod Santos’s most recent book is The Intricated Soul: New and Selected Poems. He has received grants from the Guggenheim Foundation and the National Endowment for the Arts, and he was a finalist for the National Book Award, the National Book Critics Circle Award in Criticism, and The New Yorker Book Award. In 2006, he was presented with the Umhoefer Prize in the Humanities for his book of translations, Greek Lyric Poetry. He is also a recipient of Theodore Roethke Memorial Prize and an Award in Literature from the American Academy of Arts and Letters. He lives in Chicago.

An outdoor bench in the hospital gardens,
the terrace bordered by waist-high,
vase-shaped bushes. Because it was Sunday,
the streets were empty and sounds not audible
for the rest of the week were audible now.
The opening and closing of a door. The voice
of a man scolding his child. A moped stopping
at the curb. Bird sounds, and not just city pigeons,
but finches, chickadees, starlings, jays.
The gardens weren’t too crowded, the sunlight
wasn’t too bright, the air was neither too hot
nor too cold. Though I observed them very carefully,
the expressions on the faces of the people nearby
were careful not to give anything away.
To my left, the branch of a shade tree hollowed
by insects still bore a few leaves, and where
the forked trunk split, a plastic grocery bag
was lodged like the nest of an animal or bird.
And so the hour passed, each moment saved
from a morning wasted in useless self-reflection,
and by the time I went back indoors, anything
seemed possible, happiness as well, as long
as my mind kept pace with whatever
new perceptions came my way.

As if I were a newcomer to my own emotions,
the first thing she asked me was “How do you feel?”
I did my best to give her a thoughtful answer,
but when I saw that she didn’t even note it
on her legal pad, I began to revise, augment,
elaborate on what I’d said. This went on until
I was no longer sure what I was trying to say,
as if my words had only confused my thoughts,
and I felt the urge to ask if I could start over again.
Perhaps to verify my impressions, she took up
the narrative and played it back more or less
in my own words, choosing this image,
not that, this phrase, not that, carrying on
until she reached the moment where I’d left off.
But why stop there? Since we already shared
a point of view, why not push on to the conclusion?

On the wall behind her, a hand-textured
canvas print of Tuscan tiles, the brushstrokes
varying from one square to the next, first left to right,
then top to bottom, then left to right again.
Though I expected it to be filled with tissues,
the trashcan was empty, as was the acid green
Lucite vase on the table. It seemed that
wherever I rested my eyes I was reminded
that I was talking to a stranger, and in so doing
that I was learning all over what it means to exist.
Pleased with the progress I was making,
at session’s end she warmly extended her hand
and I, in turn, received it (slavishly) in both of mine.

Waking early, as I often did, it took little effort
to create the effect that something was in store for me,
and whatever that was would come as a surprise.
Likewise, nothing seemed more natural than
the thought that I was led by rather than leading
my life, the truth of experience always only about
to be mine. Though the effect was brief, the memory
of it lingered, and from time to time throughout
the day it came over me, the sense that I was
traveling “lifeward,” becoming myself all over again.

Eye-level in the overheated waiting room,
a fireplace fire played in a loop on the television screen.
It was difficult to tell where the loop began,
though the logs continued to burn and the flames
continued to rise. As if testing the heat of the fire,
a child reached out then quickly withdrew his hand.
Somewhere behind me a cell phone rang;
in front of me, an old man in overalls
tapped his leg with a magazine while his wife,
tiny and archaic, sucked the inside of her cheeks.
Out of consideration, no one looked at anyone
directly, but at everyone from the corner
of an eye. From time to time a man in white
arrived to survey the room. He understood
all of us, and all of us had something to be understood.
From a distance it might’ve appeared
that we were there because we had nothing better
to do, and nowhere better to do it, that nothing
mattered less than the world beyond the world inside

Having signed out early in the afternoon,
I bought apples at the farmer’s market, a wedge
of pie at the bakery, a newspaper at a stand.
On my way to catch the crosstown bus,
I stopped to watch as one by one a tower crane
raised a rusted (or rust-colored) I-beam
from a flatbed up twenty-some stories to the roof
of the City Services Wing. The framing in
of the final floor provided occasion for a topping-off
party in the courtyard of the art museum,
a slate space where, each at a different angle,
a number of canvas bannered tents were anchored
to bags of sand. I sat down on the ledge
of a raised concrete flowerbed planted with rows
of Chicago Brick wrapped in woolen sweater scraps
and sprinkled with mustard seeds. In a few small
patches of light, some of the seeds had started
to sprout, and now and then a woman I took to be
the artist appeared with a watering can. Because,
I assumed, the project required the theoretical
silence of nature, my polite inquiries were met
with an unresponsive stare.  Sympathetic as I am
to the aesthetics of silence, to the childlike fantasy
of escaping the material world of words, the cursive
spray of her watering can and the fluent undulations
that darkened the bricks gave rise to such intensity
of feeling that even hours later, long after I’d stood
and applauded the tedious speeches, I still bore
the impression, the senseless, unshakeable impression,
that I’d been made the butt of an elaborate joke.

I once read in a book, which I now recall
only in the vaguest terms, that we know the world
not through our sensory perceptions—which are,
at best, unreliable—but through our thoughts
about those perceptions. At the time, the idea
struck me with the force of revelation, for it seemed
that in the delay between sense and reflection
another unarticulated life, another stream
of consciousness, continued on within me.
And I remember thinking: “That’s just how it is!”
On the other hand, there were days of inertia
when the idea struck me as absurd, when thought
seemed little more than a curtain between
myself and the world. And on those days
I made a point of limiting those dealings
necessity requires to the barest possible details:
“My social security number is…” “I need an MR 16
halogen bulb.” “Go three blocks south, turn left
on Lasalle, and you’ll find it next to a comic book store.”
Clearly I hoped to achieve something.
At the very least, to make better use of my time;
at most, to keep my secrets to myself. To earn
the right to observe the world without taking part,
that was the dream: the bystander standing
beside the fact, the fact standing on its own.
A not entirely human dream but one,
nonetheless, in which I was able to lose myself
in the busyness of keeping myself alive.