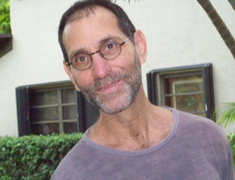 Steve Kronen’s Splendor appeared from BOA in 2006.  His poetry has appeared in The New Republic, The American Scholar, Poetry, Agni, APR, The Georgia Review, Ploughshares, The Yale Review, The Threepenny Review, and elsewhere. He has been a fellow at Bread Loaf, and the Sewanee Writers’ Conference, received an NEA, two Florida Arts Council grants, and the Cecil Hemley Memorial Award from the Poetry Society of America. His first book, Empirical Evidence, won the Contemporary Poetry Series prize and was published by the University of Georgia Press in 1992.

The sternum’s gladiolus (L: small sword) bisects
the chest cavity coronally where the wan
blood’s re-oxygenated just beneath your sweater’s V,
the monotonous muscle squeezing out its tattoo,
as it must in order to square
things with the lungs, the cells…. And yet, the weathered

heart pumps, we’re nearly certain, some special ethered
serum through the works, Eros launching a dart at one sex
or the other – (bead straight, conclusion fore-
gone, a magician’s wand)
and the clock-work lub and dub’ll
swell to the chords of a Beethoven’s Fifth

once rightly agitated, years of pent
up stuff outing like a split atom. They’re heard,
though each throb’s a batter at the walls, reminders of debil-
ities to come, each a palpable denial of Berkley’s ghostly physics —
“too subtle for the airiest human head,” says Byron in Don Juan
and so patently absurd, Dr. Johnson, indignant, swung forth

his cocked, refuting foot with “mighty force”
into a rock one Sunday outside church (if I’ve
recalled the Life correctly). Yet neither could deny the onus
the heart bears and I listen sometimes, try-
ing to trace the thousand zigs
and zags of its circuit, pulse bedevil-

ing my good sleep with a rising audible
twanging like dots and dashes from some for-
eign, occupied shore. Or, it’s simply mice – one seeks
a way out, tap tapping behind the walls, his vague syncho-
pations signaling the blind mouse behind whose own tapping treble
and bass leads the next – as if all, at last, might stumble on some hard-won

explanation that lays out plainly for me, one
unifying field accounting for two
hemispheres of brain where dwells a three-
personed (Harpo, Chico, Groucho?) god and four
truths noble enough to focus all five
senses, lit up like candles on day six,

so that I, even now, dulled and daily numb-
er, grope still to decipher the infinite
odds of my good luck, my fumbling digits touching, again, your horrible, miraculous scars.

2 Responses to The Odds