How to Skin a Bird 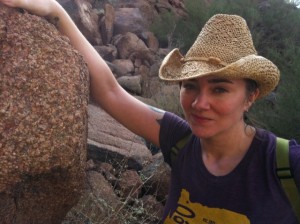 Chelsea Biondolillo’s prose has appeared recently or is forthcoming in Hayden’s Ferry Review, Wilder Quarterly, Brevity, Flyway, NPR, The Fiddleback and others.  She is currently an MFA student at the University of Wyoming majoring in both nonfiction and environmental studies.  In her spare time she reports on the local flora and fauna for Wyoming Public Radio.

Your first and only incision will be right over the sternum. All birds have a bald patch there. Blow lightly on the breast until the feathers begin to part and you can see the pale skin beneath.

Rest your finger there for a moment. Feel the bone your blade will follow. Make a wish, if you must, and then slice from collar to belly carefully.

I used to keep the letters my father had written to me in a box with all of my other letters. There were three of them, all written before I was eight, on lined paper with a ripped, spiral fringe. He put them into the envelopes he sent my mother. Otherwise, they were empty, except for a check, always made out for $75. Sometimes the envelopes came from Alaska or Tahiti.

When I was a little older, if I saw the mail before my mother, I would feel the envelopes, to see if they were thicker than just-a-check.

You will need to cut the spinal column and trachea before you go any further. To do this, carefully work a small surgical probe between the skin and neck muscles at the very top of your cut. The curved tip is blunt, and if you advance it slowly, it shouldn’t tear the skin. Work it behind the neck until you can see it on the other side. Then slide the lower blade of a scissor along the steel. When you can see the scissor’s point, cut.

On larger birds, you may need to cut two or three times, blindly. This is why the probe is important: it keeps you from cutting through the back of the neck and beheading your specimen.

I stayed at my father’s parents’ house a few times as a child, usually when he was visiting, too. Even though he had a local apartment twice, I never stayed at either one. In the second apartment—which he took me to once for just a moment—I had my own room. I looked in through the darkened doorway and saw a bed and bedside table, no lamp, and then we had to leave.

I never stayed alone with him until I was in college. This doesn’t feel ominous, just disconnected.

His parents lived in a double-wide trailer, in the yard of a landlord I never met. I slept in his little brother’s old room.

After the neck is cut, you will slip the wings from their bones like a jacket.

To do this, repeat the following steps for each side: using your fingers, pinch the humerus below the shoulder joint and slide the skin away from the muscles like you are taking off tight jeans or panty hose.

Keep rolling the skin from the structure until you feel a boniness branch off from the ulna, just past what would be the elbow joint. This is the first primary feather. Use your fingernail to scrape it out—as you would a wasp’s stinger in your own arm. There will be a few primaries. Pop them from the bone one by one, and then cut the humerus close to the shoulder. Be careful not to cut through the skin. Both wings should be intact in the final specimen.

Uncle John had hundreds of comic books. I lay in that strange bed and read them through hours of sleeplessness. I preferred Casper and Archie to the superheroes because of the simplicity of their drawings. Hulk and Iron Man comics seemed busy and cramped; I couldn’t always tell what was happening.

My grandmother, his mother, was an Avon lady; she sometimes let me take home tiny lipstick samples of last season’s colors. She had an impressive collection of facsimile whiskey decanters shaped like famous people and a kangaroo skin my father had brought her from Australia.

My grandfather had a wooden leg and a glass eye. I was not told this, but discovered the prosthetics while snooping. I was told that he used to drink homemade corn liquor that he filtered through loaves of coarse wheat bread. He did this a long time before I was born. I don’t remember who told me that.

When both wings are free from the body, gently peel the back skin from the muscle. If it sticks, as can be the case with some freezer-burned birds, use the probe and scalpel to loosen or cut through the scab.

You will cut the legs by rolling the skin away from them as you did with the wings, but stop sooner, before you get to the scaled leg skin. Cut the thigh bone even closer to the body than you did on the wings.

Now pinch the tail ligaments and cut just above where you can feel the feathers end. If you cut too high, it will be a bit messy, but not unsalvageable. If you cut too low, the tail will fall off. This can’t be fixed, so err on the side of a mess.

My father’s mother would fry trout in thick oil for dinner.

We ate peanut butter and mayonnaise on white bread for lunch. I asked that this sandwich be put in my bagged lunch, when I got back home to my mother.

For breakfast, my grandmother would make tiny pancakes for my father and me. He would put butter and jam on them, instead of syrup. He would roll them up like cigars and eat them with his hands. So would I.

The body, separated, should resemble a very small version of a fryer or turkey. Notice that the muscle tissue of songbirds, however, is all dark meat.

You will carefully collect tissue samples from the breast, heart, and liver now, and determine the sex of the bird. You may also need to collect stomach contents.

Follow the photocopied instructions for this step. Use the small plastic vials, and consider all samples dry unless your collections manager tells you to store them wet, as is sometimes the case with rare specimens.

My mother never spoke ill of him, I want to say that. But the spaces between his contact swelled with meaning by the time I got to high school. First his father died, and then his mother. I asked him if I could come to her funeral, after I learned of it from my mother’s mother—her neighbor. I smoked Marlboro Lights in front of him for the first time that weekend.

I stayed with him and one of the women he married a couple of times, once in Spokane and once in Pleasant Hill, California. She had older children, cut his meat for him, and talked in a nasal, baby voice.

He didn’t travel overseas anymore, but would frequently overspend. During one visit, he bought a new car and a giant television. Then, he got a nosebleed and sat in the center of his bed staring into space. His wife said, “Go comfort him!” Their marriage may have lasted ten years. Maybe less.

The head is difficult, so take your time.

Start by pinching the neck and working the skin away from and over the back of the skull. When you get to the eye sockets, use your scalpel to carefully cut through the thin membrane that connects the lids to the eyes.

You will need to keep the majority of the skull intact, to maintain a natural shape, but the soft tissue should all be removed: tongue, eyes, brain. Use caution so that when you cut out the tongue, you do not damage the hinges that connect the upper and lower maxilla.

The last time I stayed at my father’s house, he was living alone in a near-bare apartment outside of Alameda, near a marina. We ate out, because the only thing in his refrigerator was a whole roasted chicken from the grocery store. He lamented my inability to cook. He showed me his cupped palm, full of old wedding bands.  My mother’s was not there, he said, as he clamped his hand closed and carried them back to wherever they’d been hidden. Did he think I might have asked for it? It broke, he said, making a joke of it.

I awoke the next morning in his (only) bed with his arm around me. I spent the rest of the week on the living room floor without comment.

The specimen will be used for study, it isn’t intended to seem life-like—keep that in mind as you finish. After washing and drying the skin, you will use cotton wrapped around a small dowel to replace what you have extracted. Use enough cotton to create a sense of fullness, in the eye sockets, in the belly.

Tie the legs together, so they do not splay, and attach the specimen tag using a square knot. Paint the ends of the string with clear nail polish. Then close up the original incision.

After college, after my own failed marriage, he regained an interest in me. I tried to be polite when he came to visit me in Washington DC. I met him downtown, but did not invite him to my house.

A few years later, one of his girlfriends called me to say he was depressed and would I please call back later to cheer him up? He’d mentioned her once. She had a little boy, he’d said, whose name was spelled “Jesus.”

He had told me her name, but I’d forgotten it and so had hung up on her the first time she called, thinking it was a wrong number. She spoke very little English. The conversation was frustrating for us both. I didn’t call back.

You may be tempted to take your needle and thread and sew dozens of the smallest stitches you can, as though attention to detail could hide the hole you’ve made. Resist this urge. Everyone expects a hole in an empty skin. Dip your needle once twice three times and then pull the thread tight. It’s enough.

When I stopped answering his emails, he would telephone. The calls came every year or so, between girlfriends or wives. Once, late at night in a Barcelona train station, I was confused by the time difference and answered my cell phone, thinking there must be an emergency. He was bored and lonely. He made a joke about how long my master’s degree was taking.

When I stopped answering the phone, he started to text. He always tells me first, that he’s broke, and second, that he’s single.

Before you position the bird to be dried, stick one straight pin through the base of the bill vertically from bridge to chin. Thread a small piece of twine through the nostrils and around the bill, using the pin as an anchor to cinch it tightly closed.

Use as many pins as you need to hold the specimen in exactly the position you want on the board. The head should be facing forward or slightly up, the wings tightly folded, right leg over left, and tail feathers spread just to the width of the body. With proper preparation, it will keep this shape through decades of routine handling.