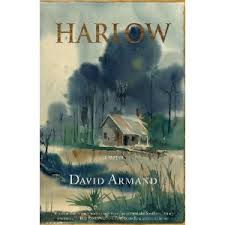 Winner of the George Garrett Fiction Prize for his novel The Pugilist’s Wife (Texas Review Press, 2011), David Armand second novel, Harlow, is a raucous and evocative tale, the story of a young boy, Leslie, attempting to find his father, Harlow, in the harsh landscape of a frigid Louisiana winter. Harlow begins with following paragraph:
It was dark. The boy lay down in a swale and rolled the flannel shirt he had been wearing into a cigarette shaped pillow and placed it under his head. He closed his eyes and tried to sleep as the crickets played a steady hum in the woods around him. A car occasionally drove over the gravelroad beyond him, throwing rocks and dirt down and over near the ditchbank where the boy lay shivering now, the red clay loosening from the embankment and powdering the boy’s clothes and skin a strange ocher. He tucked his knees into his chest and rubbed his cheek against the warm flannel and looked peripherally at the winter sky overhead. Each white star and the full white moon seemed holes punched into the myriad blackness surrounding everything: the only thing darker—more black—the pine trees jutting from the ground like crooked black teeth against the cold and hollow mouth of the sky behind them.

Armand’s introduction reflects his deftness with sensorial textures and a style that recalls Faulkner, a linguistic breadth that compels readers to slow down and relish the language. Indeed, the book’s tone is headlong and highly lyrical, akin to Cormac McCarthy’s novels Outer Dark and Child of God or William Gay’s Provinces of Night. These influences are also notable in Armand’s technique and language: He eschews quotation marks in dialogue, often creates portmanteaus, and his sentences are usually serpentine, abundant, and elegant, teeming with idiosyncratic though effectual diction such as “vermiculate,” “lugubriously,” and “vanquished.”  Paradoxically, most of the action in Harlow is quick and harrowing, adding complexity to Armand’s approach: the language, often intensely rich, fuels the narrative and amplifies a story in which the memories of father and son communicate so strongly and seamlessly that they are often dizzying. The book is brief, but the story has a long half-life.

In Harlow, Armand’s characters are products of extreme familial dysfunction, son and father both must learn to shuck the consequences of past neglect, violence, and ignorance to locate and come to terms with their identity and relationship. And despite the rough world in which they live, and perhaps because of it, both characters are endowed with artistic sensibilities—Leslie, the son, in his sensitive and contemplative reflections on self and wilderness and navigation of memory, and Harlow in a more literal sense, in painting.

In sum, Harlow is a macabre, gothic work but manages to interweave some lightheartedness, particularly in moments when Leslie interacts with a girl with whom he is quickly smitten, Nevaeh, a complex and pivotal character herself. At its heart, though, the novel is preoccupied with the primordial: place, identity, violence, blood-kin, the latter intensified in a moment in which Leslie is acknowledged by his father, who douses him in the blood of a boar after a successful hunt:
The boy feels good, warm with his own blood pulsing through him and the blood of the animal they’ve just hunted and killed on his flesh and his father’s hand on his shoulder now: gripping his son, his own blood, for the first time now and the boy Leslie breathes in the cold air but he is not cold now and he stands in the bottoms, his boots slowly sinking into the mud but the whole time his heart rising in his chest just as the dead and bloodied boar had risen up on that creaking treebranch like something cold now being resurrected form the mire.

Again, what separates a book such as Harlow from the myriad southern novels that straddle the line between popular and literary fiction—and indeed, what makes Harlow undoubtedly literary—is the tonal maximalism, the luxuriating in evocative words and long sentences, the obvious love and care for language. Indeed the dichotomously brusque plot and the highly lyrical execution create a harmony that induces a kind of synesthesia: Reading Harlow feels like biting into a juicy peach freshly plucked from the orchard. It is a delicious read, and fans of writers such as Cormac McCarthy, William Gay, Charles Frazier, and Charles Dodd White will enjoy this book immensely.