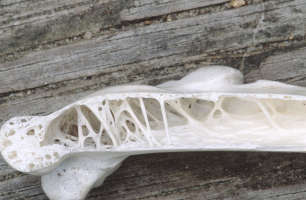 Jack B. Bedell’s Bone-Hollow, True: New & Selected Poems marks a mid-career milestone for a poet that’s helped define Louisiana’s contemporary poetry, as well as Southern poetry in general. Divided into four sections—New Poems, Call and Response, Come Rain, Come Shine, and At the Bonehouse—the book centers on the well-known Southern motifs: landscape, family, and identity, but Bedell’s work, as evidenced in this generous selection, paradoxically transcends the parochialism of these thematic trappings through sheer skill; his pacing, imagistic texture, and gothic acknowledgments of mortality illuminate these accessible and memorable poems.

Certainly, in a poem such as “Travail,” Bedell even denies one of the central Southern images that still haunt many poems from the region:
Handling serpents doesn’t impress me.
I’ve done it too often to feel any real breath
on my neck from the act. I’ve come home
too many spring mornings from the marsh
at the back of my neighborhood with a pillow case
full of snakes snatched from the water’s edge. . .
And while there’s “no real trial to serpents . . . pulsing in the boards of some old church,” the speaker does fear the “row or Mason jars full of strychnine. . . lined up on the altar,” another test that involves “pain and grace.” Indeed, it is this pain and grace duality that informs much of the book: the grace of a bird of prey, but the pain it brings to the creatures it hunts (including, metaphorically, the poet); the grace of being with a wife, but the pain of touring with her a prison museum, haunted by death.

Bedell also excels in his ekphrastic pieces about Monet and Matisse and Henri Cartier-Bresson, revealing his range, but the book’s crux thrives in its “pain and grace” motifs, particularly those centered in Bedell’s Louisiana. Two poems stand out: “A Barn in Arnaudville” and “L’avalasse.” The former poem brews with strangeness, a mixture of “pain” (the “storm brewing overhead,” the “straining”) and “grace,” the painterly beauty of the distant workers, the communal stirrings of the trees and grasses, and the eerie interior of the barn that nonetheless channels hope.

“L’avalasse” is perhaps my favorite of Bone-Hollow, True, a brief poem of fabled resonance and nuance. Old women of the parish walk out into rain “in their nightgowns as soon as the bullfrogs / stiffen in the ditch and hunker down, / believing the water will cleanse them of their aches / and lighten the weight their years have built.” The ghostly presence of the old women gives way to the spiritual, the Biblical: “Somewhere, the old women are bathing, / their lesson in water coming down— / now matter how it pounds, this rain / will not outlast Noah’s. Our land is thirstier than his, our sins / much easier to wash away.” Brightly evocative, spectral, seamless in its narrative movement, “L’avalasse” represents Bedell at his best, with celebrations of identity, local culture, religiosity, and landscape.

I’ve often thought that much of the poetry of the Pelican State centers on the images of water and fecundity, and it is perhaps Bedell’s poetry that most effectively explores these ideas in ways personal and relatable. Bone-Hollow, True relumes Louisiana into a mythic place, allows readers to live and love there, to glimpse an understanding of Bedell’s family, his highly complicated landscape, and the intense beauty of both, born of destruction, community, faith.