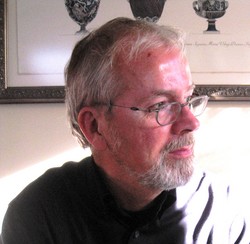 Ben Howard’s most recent books are Entering Zen (Whitlock, 2011), a collection of seventy-five essays on Zen practice, and Leaf, Sunlight, Asphalt (Salmon, 2009), his sixth collection of poems. His blog “One Time, One Meeting,” may be found at www.practiceofzen.wordpress.com  He is Emeritus Professor of English at Alfred University, where he leads the Falling Leaf Sangha, a Zen practice group for students and the community.

Call it if you must an instrument,
this meter that has served me through the decades,
its pulse an echo of my temperament,
its low-relief a match for my reserve.
But who is playing whom, I’d like to know,
feeling again the surge that would propel
the calmest, clearest mind into a maelstrom
and launch the steady heart into a vortex
where anyone could drown. In Monaghan
one April morning, I took an aimless walk,
wanting nothing more than to be rid
of aging fears and unforgiving voices.
Instead, I found the carcass of a creature,
a mess of skin and bones that might have been
a dog or newborn lamb, for all I knew.
Not what I’d expected—not at all—
nor what an April walk in search of nothing
might reasonably entail. So if I tell you
that walking steadily in prose or verse
is neither safe nor proof against disorder,
think of that ugly, desiccated body,
which, I understand, was part of nature
but nonetheless unsettled me for hours,
despite the even tempo of my steps,
the tranquil rhythm of my exhalations.