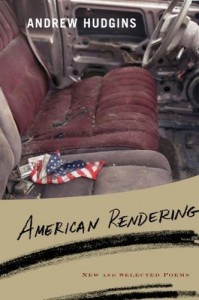 What do we make these days of the term “Southern Gothic”? Has it only become a way to promote an author, as in the way the dust jacket of Andrew Hudgins’s new and selected poems, American Rendering, flaunts that Hudgins has “developed a distinctively descriptive form of the Southern Gothic imagination”? If so, we’ve come far in the 60 years since Tennessee Williams lamented that the term was “used as a major line of attack” by “critics, publishers, distributors, not to mention the reading public.” Or has “Southern gothic” come to refer to a notable form emerging from a distinctive regional literature?

Certainly, we have the familiar tropes of the Gothic in Hudgins’ new poems: ghosts (“a creature formed of light / steps through the wall”), redemptive violence (“He bucked hard once, went limp, / and I spat his blood onto his un-tensed un-sentences”), manmade structures burning to the ground (“’He lay so near the burning house / his grease stewed out of him”), characters of questionable sanity (“Lorraine sang, Mouth or knife”) and speakers who elicit both sympathy and disgust (“I pulled carpet remnants over me, and that night / I married”). These poems also include the Southern themes that have been a hallmark of Hudgins’s poetry: race relations, childhood memories, rural landscapes, regional dialogue, small portraits of everyday life in the South and Biblical allusions and cadences. To be fair, these are also the themes that in the past have provoked critics to charge that Hudgins’s poems are too sentimental or crude.

But if we do have moments of sentimentality in these new poems—“the impossible possible once more and beauty, in perspective, / beautiful” or “For that minute, that moment, that / passage of time, I was / not childless, or a man”—they are few and far between and don’t overshadow moments of powerful authority, as when the speaker in the title poem describes how “a scorched theriaca / haloed the flames, the grease by which / we render America.” Indeed, Hudgins will approach sentimental subjects — a funeral, a wedding, a mother’s death, a friend’s suffering — only to downplay, or deny, their sentimentality by exposing, through uses of Gothic elements, their true horror and isolation.

But is simply combining “Gothic” and “Southern” elements the recipe for the “Southern Gothic”? If so, could we take a writer like Phil Levine, who also writes of barren landscapes, redemptive violence and characters who evoke both sympathy and disgust (only usually set against landscapes of the industrial Rust Belt) and call him an “Upper Midwestern Gothic” writer? Would the label stick?

These are rhetorical questions, of course, because the answer is more intuitive and requires the necessary element of the sublime. Lewis Simpson wrote that “the present-day southern gothic defines itself in examples as a vision of life that blends realism and grotesquery in a manner that we readily grasp as typical of the southern literary imagination,” and under such criteria, the answer is yes, Andrew Hudgins is indeed a writer of the Southern Gothic imagination, and a very fine one at that (by whiteside at http://www.dresshead.com). Hudgins is also one of the few poets practicing this genre. And because poetry is (typically, and especially in the lyric mode) more concerned with investigations of consciousness than the narrator’s revealing of information, the poem can serve as a better forum for the kind of imaginative leaps that blend realism and grotesquery.

Hudgins remains one of the best contemporary poets at conflating the lyric and the dramatic, which is to say, he is skilled at making imaginative leaps. There are moments of remarkable, subliminal transformation in these new poems, as in “After Teaching,” when the speaker sees “inside the larger swelling of Benita’s swell, / an ancient old couple turn a corner in an ancient city.” Or in “The Bluebird, Singing, Leaps into the Sky,” when a bluebird, killed by a young boy on a hunt with his father and grandfather

leaps into the sky
and from the sumac, bewildered,
running with outstretched bloodstained arms,
eyes shy and nearly wild,
there staggers toward them helplessly
the blue unborning child.

We might be satisfied with the good content here, but there are also fine formal poems in this sequence, including a villanelle (the haunting elegy “The Names of the Lost”) and a sequence of five ballads (or near-ballads with off-rhymes). But the near-perfect pacing of these poems is achieved more often than not through the play between a polysyllabic consonance and a beautiful, liquid assonance, as in “Mother”:

I followed my shadow to an appealingly dilapidated pond. Ghostly koi coasted under ripples undulating to the tempo of hidden pumps. Fish mouths mouthed my shadow

These lines have a haunting sound, reminiscent of the language of the Southern Gothic, and coming from, of all people, a golf caddie. Indeed, Hudgins’s speakers are often the cast-aside, the homeless, the drunks — what Molly Boyd calls the Southern Gothic’s “inbred lower class living in extreme isolation in closed communities, which are plagued by economic impoverishment, educational ignorance, religious fundamentalism, racial intolerance, genetic deformities, perverted sexuality, and unrequited violence.” They are people, in other words, with whom a poet of democratic and Whitmanic principles can empathize.

In Hudgins’s earlier collection Babylon in a Jar, whose 38 poems are represented by only 16 in this selection, the speaker in the title poem drives by and longs to be like the drunks, asleep on side of the road (“I’d never done that, slept the night, / drunk, beside my car, so I envied and hated the drunks slumped in the crushed oyster shell”). And in “Mother,” the opening poem in American Rendering, Hudgins seems to write in the voice of one of those drifters:

After midnight, I dragged carpet padding
from a trash bin and spread it on the asphalt
between the wall and dumpster. Screened from sleet,
I pulled carpet remnants over me.

Similarly, in “A Handful of Keys”:
When I woke, a tailpipe thrummed inches from my face,
and it inquired, Sir, are you hurt? Solicitous automobile,
I thought till I saw my own owlish face regarding me from the black
sunglasses of a state trooper who asked
if I’d been drinking.

Are these the same figures as those who appear in “The Choice the Driver Makes,” one of the best poems from Hudgins’s first book, Saints and Strangers? In that poem a 34-year-old Hudgins wrote from the voice of a roadside stranger who is “invisible / until the harsh lights choose[s] me out of night.” Flannery O’Connor once advised writers to “draw large and startling characters,” and although Hudgins’s peripheral characters may not always be large, it is their startling qualities that lead the reader to new, contemporary considerations of the Southern Gothic.

After all, the best of the post-Faulkner Southern writers, including O’Connor and Barry Hannah, tend to render the South, at times, absurdly. Hudgins has also adopted this strategy, though occasionally the absurdity can lend itself to an unwelcome obscurity, as in “Under the Horse,” or distracting implausibility, as in “Came Back.” But the new poems in American Rendering do not necessarily, as one critic has said of Hudgins, enjoy “the moral precisions of family life.” At their best, they balance and resolve the tension between desire and violence, between sex and death, between the imaginative and the real. And thus the structure of this book makes sense — we read through the new poems  in the collection first, then make our way up through Hudgins’s career, beginning with the first book, discovering a poet who returns to the same themes, obsessively perhaps, but with more daring and brilliance and less sentimental attachment each time. It is enough to affirm that Southern Gothic has become a distinctive art form and lay to rest Tennessee Williams’s lament; yes, the Southern Gothic is alive and well in the hands of Andrew Hudgins.